Girls Build up for a Powerful Season 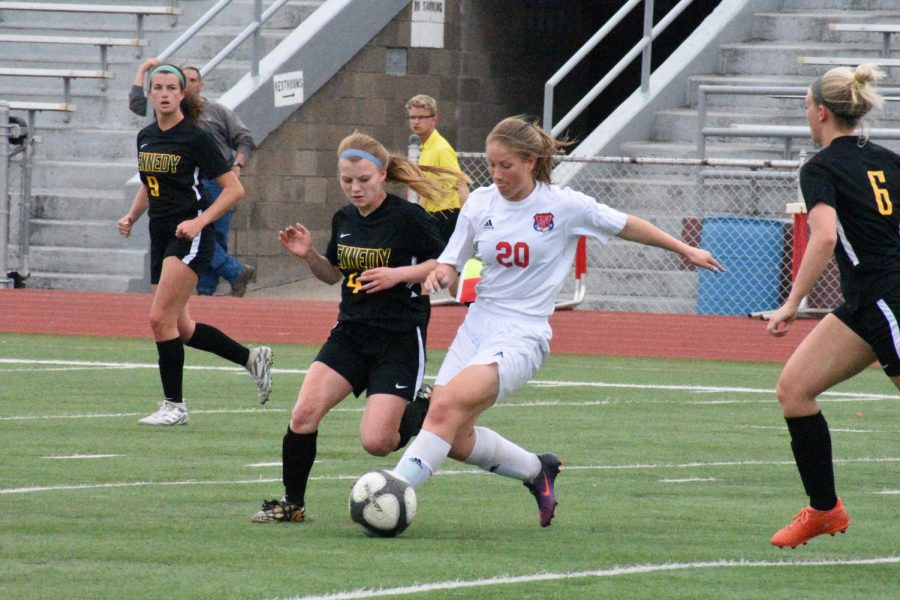 Hannah Mundell, sr., trying to steal the ball from Washington, to pass to Dekko.

As State approaches, the Kennedy Women’s Soccer team prepares for one of their best seasons yet. The team is currently planning for a long, yet worthwhile season as tournaments, regionals, and state approach.

The girls start their first tournament May 18 at Valley Stadium in Des Moines, with regionals following on May 30. Finishing off the soccer season is the State tournament on June 7 at Des Moines-James Cownie Soccer Park with the Iowa Girls High School Athletic Union.

The team of girls have a strong bond, and trust towards one another.

“We’re all friends outside of soccer, so we always have each other’s back.” Kenadee Dekko, sr., said.

Dekko is the varsity team caption along with junior Jennifer Schmidt. Dekko feels that she is a good role model for the underclassmen, both in the game and in the classroom. Schmidt and Dekko are midfielders, they help communicate to everyone on the field.

“I’m always trying to do better than last year, and make this my best year. It will be my fourth year at state,” Dekko said.

However, the team’s strength not only relies in their friendships, but also on the attitude of each other. Junior Kendal Runels encourages her teammates to stay positive and communicate.

“By keeping each other in check and trying to include everyone, we can have fun while getting work done,” Runels said.

The team wants to go to State and have their best year ever.

“we have some things to figure out, but we have the talent to go farther than last year,” Dekko said.

The women’s team has had some tough turn outs against teams Linn-Mar and Washington.

“We beat them [Linn-Mar] and that was a turning point for us, it gave us some excitement for the upcoming competition,” Runels said.

Runels is the Goalkeeper, but her main objectives are to stay positive in games and making people happy, laugh and stay upbeat during their practices.

“I want to teach my teammates to always stay positive no matter what situation,” Runels said.

Rylee Ervin, jr., is a right defender or central back. She considers herself to be very well at knowing what goes on the field, not to mention communication.

All the teammates are one, whether they learn from one another, or win and lose as a team, their bonds are what keeps them strong and passionate.

“I’ve learned many things from this team, like how to be a team player and how important communicating is,” Ervin said.

Runels knows being a teammate is important and a great learning process.

“I learned positivity goes a lot further than negativity, but I want to teach my teammates that winning isn’t everything, it’s nice, but hard work and determination determines the type of player you are,” Dekko said.

Ervin enjoys being at practice, and hopes to continue being a large help for the team. She thinks practice is fun, but everyone still works hard.

“I enjoy touch pass, which has two players against two players, like a little scrimmage,” Ervin said. “However, once you score a goal, the two players who got a point have to run back and touch their goal post and continue again while the opposite team switches out.”

Runels also enjoys the touch pass drill as well, but she practices as the goalkeeper during these small scrimmages. In games she is looking forward mostly to the in-town rivalry matches, like against Jefferson and Washington High Schools. Dekko rather enjoys scrimmaging the most and the individual games with the team.

Overall, the team is involved in games weekly, and would like some encouragement while they continue their season into June.