Working as a Team for a Purpose 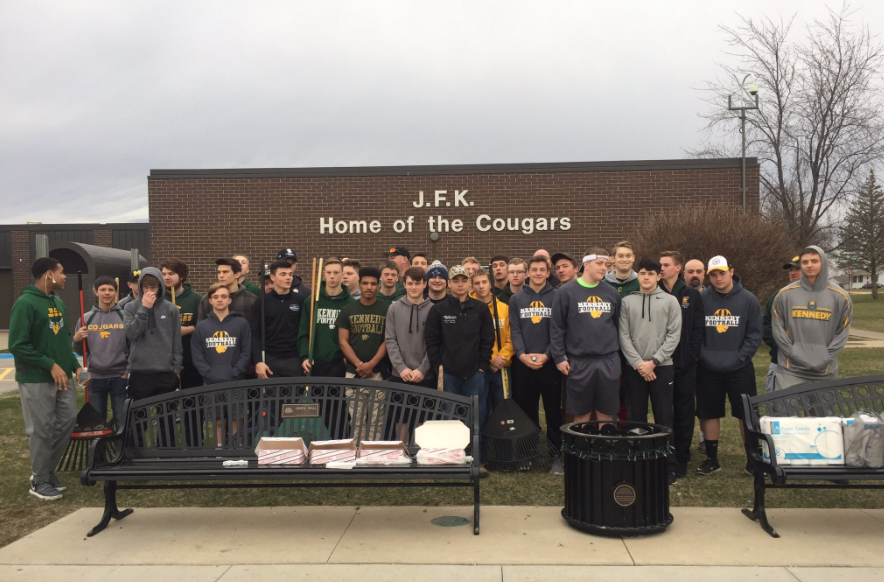 The Cedar Rapids Kennedy Cougars’ Football team went around Cedar Rapids to 12 different homes of people who are less mobile, on April 21. More than 40 of the football players showed up and helped clean up yards, clean windows, and much more.

“I thought my football coach wanted to give back to the community, if we teach the young people of today, we’ll live in a better place,” White said.

Divided up into groups, the team was led by head football coach Brian White. He took part of a similar activity back in the 1980’s at Linn-Mar High School on his football team.

White was going for a goal: to help both the community and the players. He wanted them to feel a sense of community. Being young and strong, it is a perfect time for them to engage in the community.

“I bonded with my teammates, but also being able to know that someone is going to see this and it’s going to make them feel good,” Groth said. ”It also helped inform the community about the Kennedy Football team, and how they help out people who need it.”

Students from all ages partook in the activity, ranging from next years sophomores to seniors.

“It’s important to help your community,” Ben Hoeger, so., said. “To help people who cannot help themselves.”

White also explained that they wish to continue the service projects in the years to come, with hopefully more help and to work with more houses. Additionally, the students  welcomed the ideas.

“It was pretty fun and I’d do it again, but next time I hope we have a bigger turnout,” Hoeger said.

The largest issue that came across the project was being organized. White reinforced that it wasn’t the students who were disorganized, rather himself, because of his limited experience in planning this project since it was his first time committing a team to it.

“I would do it again, but I wouldn’t want anything to change,” Groth said.

This service had the hopes to encourage the community to improve on itself and to help both the elderly and incapable with simple, yet helpful activities. The team hopes to implement this into other sports teaching all children a way to give back to the community. They also strive to make Kennedy a better place, and reinforce positive ideas to fellow students and the neighborhood around it.