Spartans Tackle Their First Season with a Scrimmage 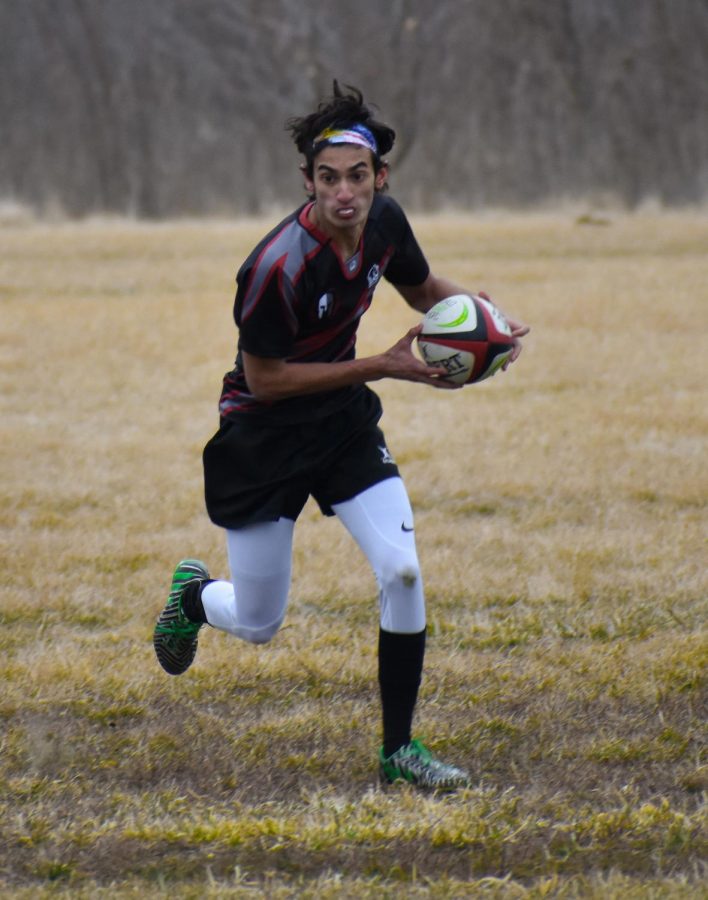 Gerald Belz had two tackles and one assisted.

Washington won the scrimmage 12 to 1 tries. A try is the way of scoring in rugby, which is grounding the ball in the opponent’s goal area or behind the goal line while still being in contact with the player. The scrimmage was at Cheyanne Park in Ely, Iowa. The first official game is on March 30, 2018.

“I hadn’t played a sport in high school and I wanted the feeling of being a part of a team,” Christian Sackett sr., said. “It is a fresh start [to play rugby] because no one else knows how to play and are beginners too.”

Sackett was recruited by the coach, Noah Williams, who is one of his friends. Sackett has no prior experience in rugby making this his first season. The coach would talk to Sackett about the game and it got his interested in playing.

“[The scrimmage] was exhilarating because it was the first game and it was fun to see how it all played out,” Sackett said. “We all were just figuring how to put practice into game.”

The hardest thing for Sackett to learn was passing the ball. In Rugby players cannot pass the ball forwards only backwards. Overall, all the players said that after the scrimmage they learned the hard way that this is a physically intensive sport and they need to work on their cardio.

“I think my weaknesses are all the physical aspects, but I have the heart to stick with it and do my best,” Sackett said.

This has added more things to do in Sackett’s life because he mostly just works and plays Fortnite or Halo in his free time.

“I am looking forward to attempting to tackle people and being a contributor to the team,” Sackett said.

Senior Jake Pearson also found out about the Spartan’s rugby team through Williams. The easiest thing to learn for Pearson was passing and the hardest was rucking, which is a phase of play where one or more players from each team, who are on their feet, in physical contact, close around the ball on the ground.

“I am looking forward to beating Wash[ington] in the upcoming game,” Pearson said. “I think our defense is good, we just have to keep our stamina up.”

Senior Bryton Kaltenbach was introduced to the rugby team by his friend. He thought it would be cool to play a contact sport in the spring and try something new.

“If I wasn’t a part of rugby I would be trying to make new music and practice the guitar more,” Kaltenbach said.

The strengths Kaltenbach thinks he brings to the team is speed and the knowledge of the game he learns through watching film and rugby games at the coach’s house while eating pizza with teammates, along with practicing as much as he can.

“I am looking forward to see how much the team improves and the final form at the end of the season,” Kaltenbach said. “Up until now, the best part is hanging out with teammates and learning the game.”

Kaltenbach thinks it was exciting to play in the scrimmage because it was the first time playing the game in full speed and it was one of his most fun experiences.

“My mindset coming into the game on Friday is to make sure I’m in the best shape for my team to contribute and help keep things organized and under control,” Kaltenbach said. “I’m watching a lot of film from other games and our scrimmage to help me improve on my mistakes and watching how the pros play the game with the flow and getting myself accustomed to it.”

Kaltenbach makes sure to keep himself and his teammates motivated to challenge the two teams this Friday. He tries to encourage his teammates when they do something wrong and help out to improve their skills.

“Someone who is a valuable teammate is someone committed to the team and tries their hardest to help the team win and help other teammates when they are down,” Kaltenbach said. “And an excellent rugby player is someone that can play through the pain and the exhaustion of the game and continue to make plays for the team and never gives up or doubts their ability.”

Junior Tucker Klett brings chemistry, teamwork, and friendship to the team. He decided to join because it thought it would be a great opportunity for him.

“I’m looking forward to play with some buddies and be successful,” Klett said. “Focusing on all the positive things that myself and the team does, most importantly just to have fun.”

Senior Gerald Belz thinks the easiest thing in rugby is tackling and running the ball having prior experience doing these things in football. The hardest thing for Belz to learn is rucking.

“My size is my biggest weakness because sometimes it is tough trying to tackle someone with 50 plus pounds on you, but it kind of ties into my strengths, because if It wasn’t for my size I wouldn’t be able to move like I can,” Belz said.

Belz is looking forward to proving to everyone that despite his size or abilities he can achieve anything he puts his mind to if he works hard enough. He worked hard for four years to try and play on the Kennedy football team, but hardly got to play except in the fourth quarters at a few games.

“To have all that hard work in the weight room and on the field finally paying off is something I’m excited for,” Belz said. “It’s not just for me but for anyone that’s out there that are in my shoes I hope that this helps motivate them so they don’t give up.”

After the scrimmage, Belz thinks they got a good sense of what it is like to play against a good team and thinks that they would have performed better if they actually had played regulation time, two seven-minute halves, instead of two 20-minute halves that occurred because the referee wasn’t paying attention to the time.

“We’re the new team in the league, the underdogs, so we can’t sleep on any team,” Belz said. “No teams should sleep on us because we have an athletic team that can do good things if we just take it one week at a time, one win at a time, we have the potential at appearing in the state tournament.”

Senior Angel Franco decided to join the Spartans to become tougher and experience something new. He thinks the team’s strengths are that they never give up and are working to get better at every practice.

“Mentally I am preparing by watching rugby games and learning what I need to do in certain situations,” Franco said. “The scrimmage was helpful because it showed us what we need to work on and what we need to be better at.”

Franco thinks the team also needs to work on trusting each other more. The team is all new to the game and it was challenging putting all their practices and knowledge into the first game they played.

The game on Friday, March 30 is at Coe College and the Spartans are playing against Mason City and Waterloo West. The games will be every Friday until May.