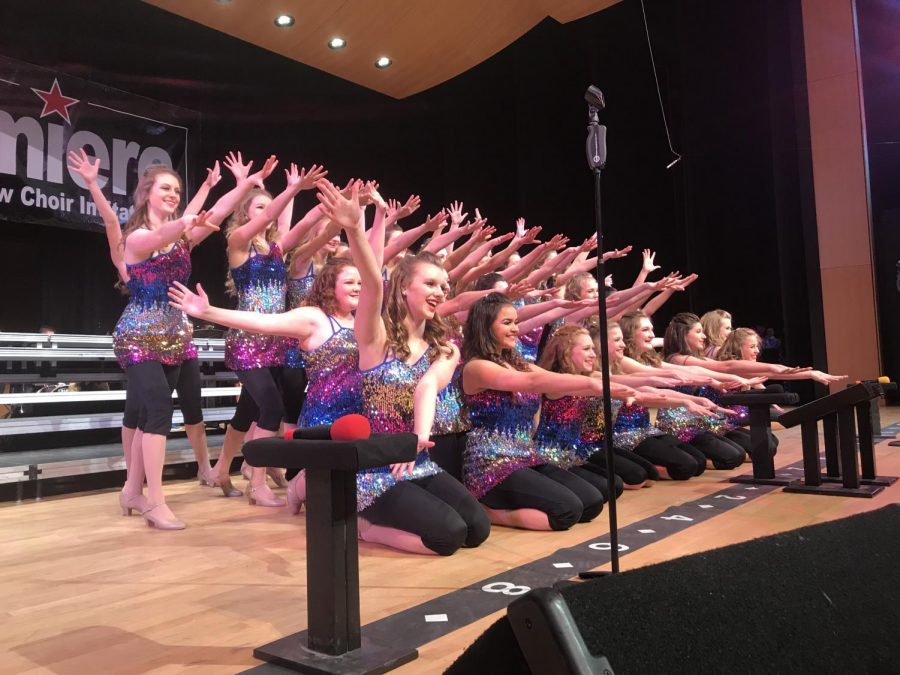 The group in their end pose after their performance.

This year’s Kennedy High School show choir was full of all the traditional aspects. Mesmerizing costumes, beautiful ballads, and stunning soloists. There was a huge difference, however, regarding the freshman Chanteurs show choir this year.

There were no boys.

The all-girls team is a result of not enough boys signing up and participating in show choir. There weren’t enough boys to fill Happiness and Protégé, the sophomore, junior, and senior teams, so they had the freshman boys join them to fill the male spots.

Typically, there are slightly more girls than boys in the freshman show choir. Last year, for every two girls there was one boy performing in Chanteurs.

“The main theater school, Harding, usually sends us 15 to 18 students that join show choir, but this year we only got a few,” show choir director Scott Muters said.

Although having all-girls teams seems inconsequential at first, it could possibly lead to issues arising in the future.

“Boys won’t be introduced to show choir with the rest of their grade and might not decide to join in the future due to feeling intimidated,” Grace Niemuth, fr., said.

Obtaining balance with the tone range was an obstacle that members of the team also faced. Normally, girls have higher tones and men have lower tones, so it’s harder to obtain those lower pitches without boys.

“We have female alto singers, and we can pick more girly songs with higher parts,” Niemuth said.

The choreography was also different this year because partner work was not an option for dance moves.

“Even if a girl hasn’t had prior dance experience, girls typically move better than guys,” Muters said. “So even if partner work isn’t an option, the girls still have better dancing skills.”

The students favorite part of the all-girls team is the social benefits.

“With an all-girls team, I feel like we were able to get closer as a group,” Mina Song, fr., said. “A lot of us had many common interests, which helped us all bond.”