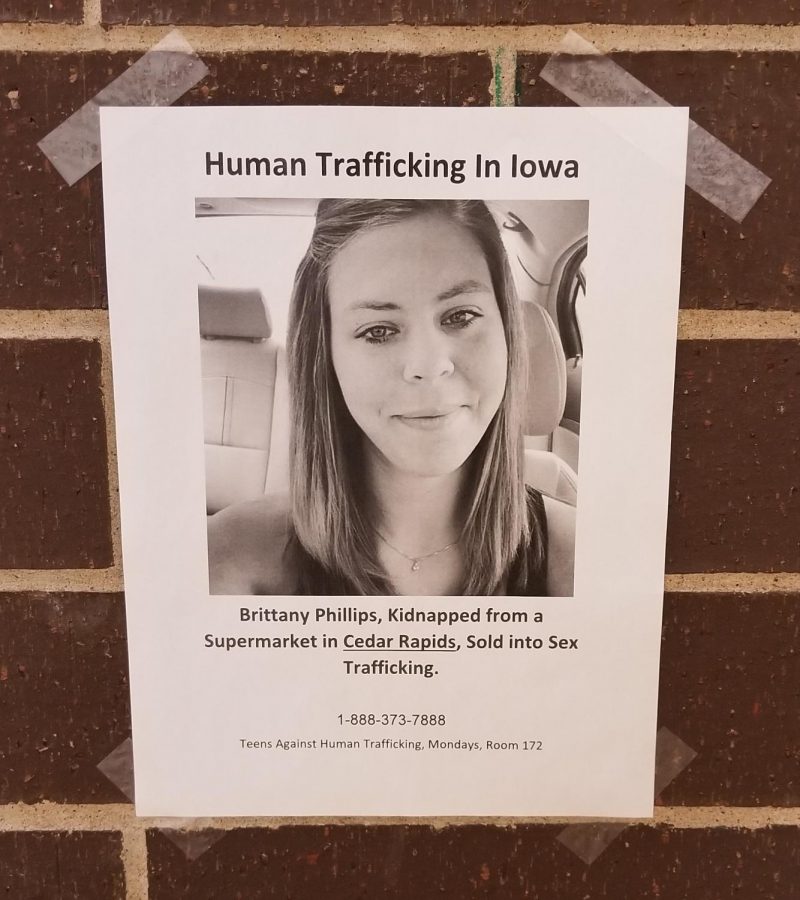 Last week statistics regarding human trafficking were scattered on the windows and bathroom mirrors of Kennedy High School.

Statistics such as the fact that 70 percent of labor trafficking victims entered the United States on legal visas and that the average age of entry for girls into trafficking is 12-14 years of age.

This was the work of the Teens Against Human Trafficking Club at Kennedy. They decided to write the statistics to bring attention to the hidden issue.

The club started last year with Social Studies teacher Melissa Feilmeier-Marzen and a few students, but didn’t really catch on due to lack of participation.

This year however, junior Anyssa Ball, stepped up and led the group to a conference in Ames this past Nov. where they got to listen to a survivor of human trafficking. The woman had actually been able to escape, which Ball said was, “a very rare case.”

Ball has been one of the leaders of the group since then, but the group splits all leadership roles amongst themselves. The club learns about the issues of human trafficking themselves and then advocates.

“We educate the other people in our community, especially in our school,” Ball said.

They worked at this not only through the statistics but also through posters. Earlier in the year they sold barcode tattoos to fundraise.

Ball defines human trafficking as, “working against your will,” and explains that there are two types. The first is labor trafficking. “Usually it’s migrant workers and they will move around and go from county to country,” Ball said.

The second is sex trafficking, which, “tends to be a lot more local, where someone is basically kidnapped or forced into it and then they are trapped and for whatever reason can’t get out of it easily,” Ball said.

Human trafficking is an issue in Iowa and is more likely to occur around truck stops and hotels. This may seem like an insurmountable issue, but there are still ways to help.

“Just being aware that it’s going on and sharing resources that can help people,” Ball said about ways to help stop human trafficking.

Another way to help is to contact the Human Trafficking hotline if you see suspicious activity. Contact the hotline at 1 (888) 373-7888.

The Teens Against Human Trafficking club at Kennedy meets on Mondays during SMART Time and is open to anyone joining.

“It’s affecting a lot of people and it is very scarring and often times people never get out of it so if we can help these people then we should do everything we can,” Ball said.