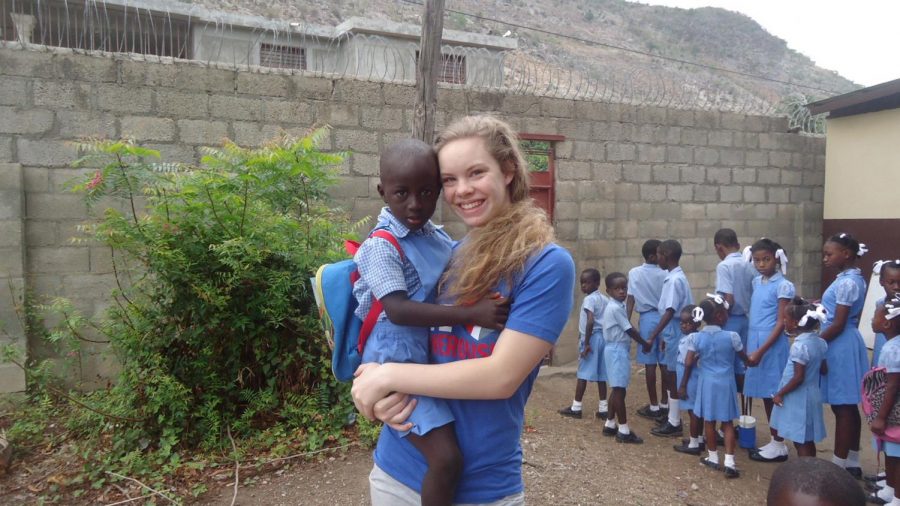 Vander Sanden with Makendy, an orphan from Haiti where she did mission work.

“The people and the country itself are so much more beautiful and genuine than a lot of people I’ve met here,” Olivia Vander Sanden, jr., said. Vander Sanden has been to Haiti twice in the last 5 years on mission trips.

While working at an orphanage in Haiti, Vander Sanden learned to appreciate where she comes from, what she has, and who she has around her.

“I think he’s seeing the worst, but I think that the people who have been there can see the best of it,” Vander Sanden said, “first you see how unattractive it is with garbage and rubbish in the streets and the people are bone thin but then you look around and realize that it’s a beautiful country with mountains and beaches.”

Vander Sanden was disgusted with Trump’s comments regarding immigrants from Haiti and African countries. She found them ignorant considering he’s on the outside looking only skin deep at the garbage on the streets. While being in Haiti she found that the children she met in the orphanage were some of the most genuine people she has ever known.

“They were always looking to help me before themselves,” Vander Sanden said. She understands that selflessness is part of Haitian culture and that Trump’s comments about Haiti is no way begin to represent what Haiti is and who Haitians are.

Vander Sanden’s experiences working in an orphanage have changed her life forever and made her far more appreciative of her family.

“Even though they have had really rough lives they are still happy and will run up to you every day when they see you in the morning, and they will always hug you,” Vander Sanden said. The orphans also often expressed their gratitude to her for being there. And Vander Sanden also knows that from what she’s seen from the people and the country, Haiti doesn’t fit the criteria to match the description interpreted from Trump’s derogatory comments.

**There has been controversy over Trump’s comments and wether he actually referred to Haiti and African countries in such a way. While there have been several senators who confirmed Trump’s use of vulgar language there were others who said they “Didn’t hear that language” which, for the record, is not denying his usage of profanity as it is a perceptual comment.