Uncharted: How a Thief Can Steal Hearts

Released in 2007, the graphics aren’t the best they could be, but what the game lacks in graphics it makes up for in everything else. 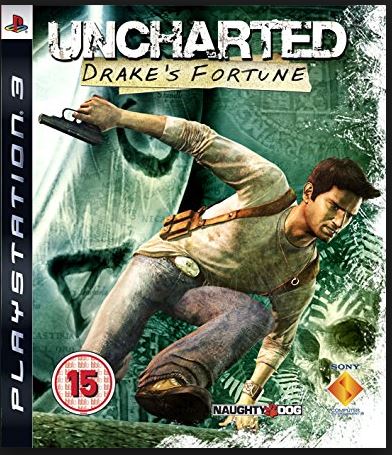 After the success of Jak and Daxter, Naughty Dog Incorporations took a new approach when they released Uncharted: Drake’s Fortune. Naughty Dog managed to give us a thrilling action packed adventure that no one had seen before.

The game focuses on protagonist Nathan Drake, a clear parody of Indiana Jones, and his adventure to find El Dorado. Besides Drake we get introduced to Victor “Sully” Sullivan and Elena Fisher.

Most adventure games that had come before Uncharted had specific tasks you had to do to complete the game and offered little to no free range movement. Uncharted allows players to feel like they are in control of this adventure and Naughty Dog creates beautiful, realistic settings that the players can move freely in.

What I like most about Uncharted is the dialogue and chemistry between characters. Every word uttered is going to stick with you because you might be playing a video game but it feels like you’re watching a movie all at the same time. The chemistry between the characters is extraordinary because you can tell by simple looks, actions, or words how each character feels about the others.

The music of Uncharted is some of the best video game music I’ve ever heard. The opening theme catches your attention and with its loud drums and various brass instruments, it gets you excited to play the game.

Now Uncharted was released in 2007, which means the graphics aren’t the best they could be. But what the game lacks in graphics it makes up for in everything else like controls, gameplay and story.

The controls are easy to figure out with the prologue/chapter 1 of the game serving as a tutorial for the player. Gameplay is action packed, fighting soldiers and rival treasure hunters, scaling beautiful building and mountains, and collecting treasure on the way.

Story wise the game is about Drake trying to pick up where his ancestor, well-known pirate Francis Drake, left off. This leads to Drake recruiting his closest friend and mentor Sully and hiring freelance journalist Elena Fisher along for the adventure.

Overall, Uncharted is a great game that I think everyone should play at some time in their life if they enjoys video games. Uncharted is just the first game in its series with 3 more games, Uncharted 2: Among Thieves (released 2009), Uncharted 3: Drake’s Deception (released 2011), and Uncharted 4: A Thief’s End (released 2016) being the last game in Drake’s story and in Naughty dogs most successful and longest series. Although a spin-off of uncharted was released earlier this year if you are like me and need your fix of uncharted. All the games have a high replay ability since you are bound to miss that one treasure or that rare achievement.

Uncharted just celebrated its 10th anniversary a week ago and it’s amazing how loyal and dedicated the fan base is. I’m glad to be part of this little family that Naughty Dog so brilliantly made.