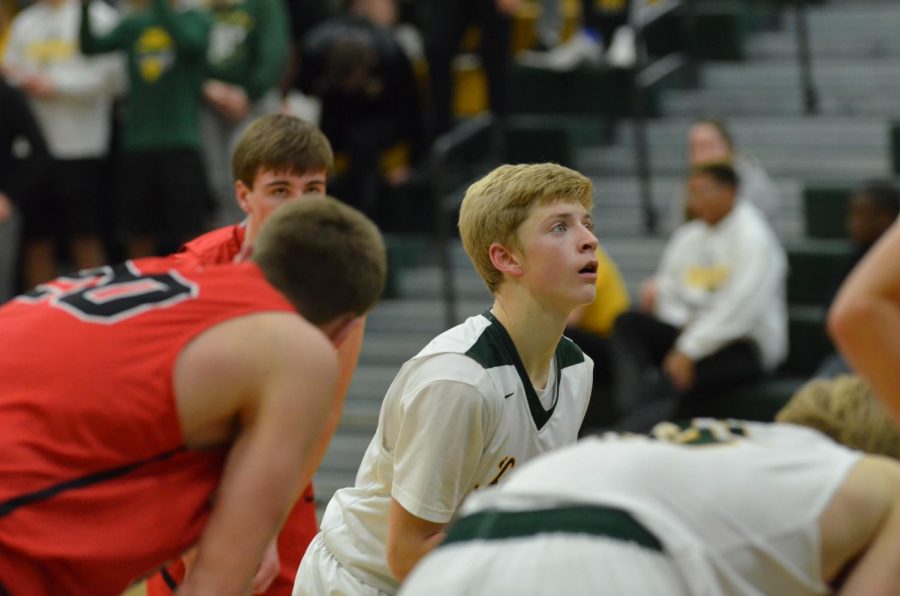 Jackson Foley stands at the line for his second free throw of the game against Linn Mar. Kennedy lost to Linn Mar 59-44. Picture by Lizzie Frost.

“Throughout high school, sports haven’t been easy for me,”  Jackson Foley, sr., said, “I’ve had to work through struggles.”

Sickness, injury, and loss of a family member are just a few things student-athlete Jackson Foley has struggled with during his athletic career at Kennedy.

“My junior year during track season, my grandma passed away and the next day I had to run at the district track meet to try to qualify for state,” Foley said.

Foley did not qualify for state during his junior year track season because he was knocked down by a fan crossing the track in the middle of the race.

“It was pretty tough for me to deal with that after knowing there was nothing I could have done better,” Foley said, “I just wanted to get better and hope nothing like that ever happens again.”

Foley is involved in extracirculars at Kennedy including, cross country, basketball, track, and academic decathlon.

”Sports are something that keeps me busy and has taught me life lessons,” Foley said, “Like how to be a great teammate and how to work hard.”

“One of my biggest accomplishments was being able to get to state in basketball last year and play at the well,” Foley said. “Getting back to state in Cross Country for the first time since 06 or 05 and placing 9th of 16 at state was another big accomplishment.”

Along with being a multisport athlete, Foley has taken up leadership positions at Kennedy.

Foley finished the 2016-2017 men’s basketball season with 218 points and 73 assists in 26 games played. He also finished with a respectable free throw percentage of 89.1 percent.

“My goal is to play basketball in college,” Foley said, “I’m not sure of which school, but I’m thinking of Upper Iowa, Coe College, or Simpson as options.”