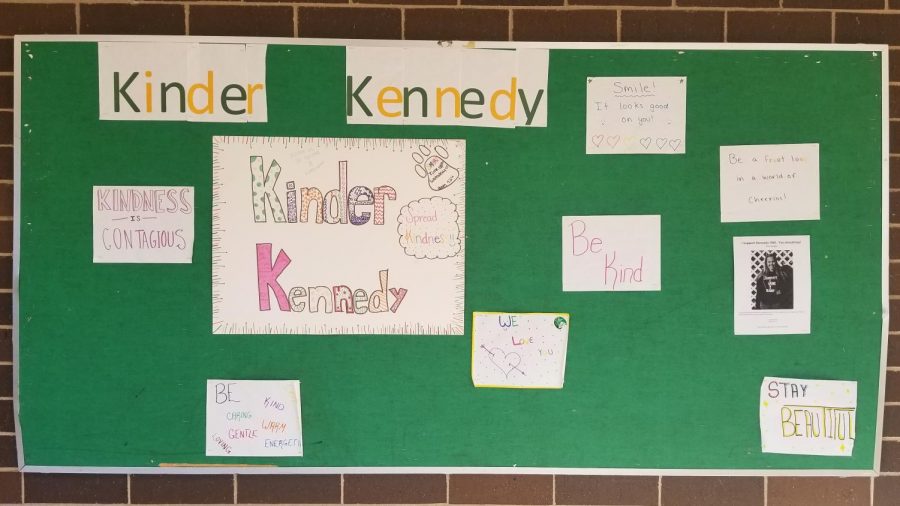 On Thursday, Dec. 7, Kennedy students will be attending an assembly where Kirk Smalley, from the organization Stand for the Silent, will be speaking about his personal experience with bullying and suicide through his son.

When I think of bullying in a school setting, my mind always goes to the same cliche image. A short boy, one who is considered different by his peers, walks head down and shoulders hunched, hoping to go by undetected, and then BANG.

He’s slammed into the lockers by a tall popular boy, one with a smirk on his face and a letterman’s jacket on his back. Papers and notebooks go flying as he stands there looming over the boy sprawled on the cold tiles of a high school hallway.

Maybe I’ve been too immersed in pop culture, but I would bet several others have this same image ingrained in their brain.

Because of this, it’s easy to dismiss the question of whether or not bullying exists here at Kennedy. According to this scenario, it clearly doesn’t. I’ve never seen an upperclassmen slam a scrawny freshman into the lockers, it just doesn’t happen here.

Assuming that because we never see this image, bullying isn’t a problem at Kennedy is a dangerous game to play.

I hear the phrase “bullying isn’t really a problem at Kennedy” almost every time the topic is brought up. Whether it’s a homeroom awareness video or a classroom discussion or just something friends stumble into talking about, dismissal is always the resounding opinion.

This shouldn’t be the case as bullying does exist at Kennedy. I’ve seen it and I’ve heard about it happening. What’s scary about the kind of bullying I see at Kennedy is that it isn’t obvious. There’s no grand spectacle with papers flying across a hallway and loud jeers from bullies said for everyone to hear.

Today’s bullying is done hiding behind phone screens and with snide comments said under people’s breath and ingrained behaviors that aren’t obvious right away. Unless you’re paying attention and thinking about your actions and the ones of those around you, it’s hard to recognize the bullying that happens in this building.

This type of bullying is not always acknowledged because not everyone sees the bully attack their victim. When a bully can harass without an audience it’s harder for their victim to defend themselves. There’s no one around and willing to back them up or to support them.

Today’s bullying is so personal and targeted, it’s hard to notice, but just because you don’t see something every day doesn’t mean it doesn’t exist.

I believe that another common thing people grapple with in regards to bullying, is a solution, how to stop bullying and how to support those affected by it.

I see an easy solution: act with kindness. If everyone asked themselves a question before they opened their mouths or started to act, Kennedy could easily become a kinder place.

Does this act promote kindness?

If the answer to the question is no don’t participate in that act. It’s so easy to make the world a better and kinder place by taking just a second to evaluate our actions before they are taken.

If you don’t act in an unkind way to begin with, it’s impossible for your actions to progress to bullying.

One group at Kennedy who strives to fight bullying with kindness is Kinder Kennedy.

“No one knows quite how to stop [bullying].” Cass Gutierrez, a Kinder Kennedy Officer, said.

Nevertheless, Kinder Kennedy fights to make an impact on students. They meet every Wednesday during SMART Time to discuss and plan on how to make Kennedy a kinder place.

“Our goal for this year was to do the little things,” Gutierrez said, “We know that us as students can’t knock out bullying all together but we think that if we do just one little thing for one person or a bunch of people then that one person’s day is made better and they feel better.”

These simple acts of kindness are what could make Kennedy a kinder place. Simply wanting to act in a kinder way will discourage bullying. If students come together to show that bullying will not be tolerated, and let kindness prevail, this issue could be easier to fight.

“I think it would be really nice to see everyone at Kennedy just be one big family,” Gutierrez said.