Playtime Poppy and its True Impacts

The Lion King Junior begins at 5 p.m. in the Kennedy auditorium 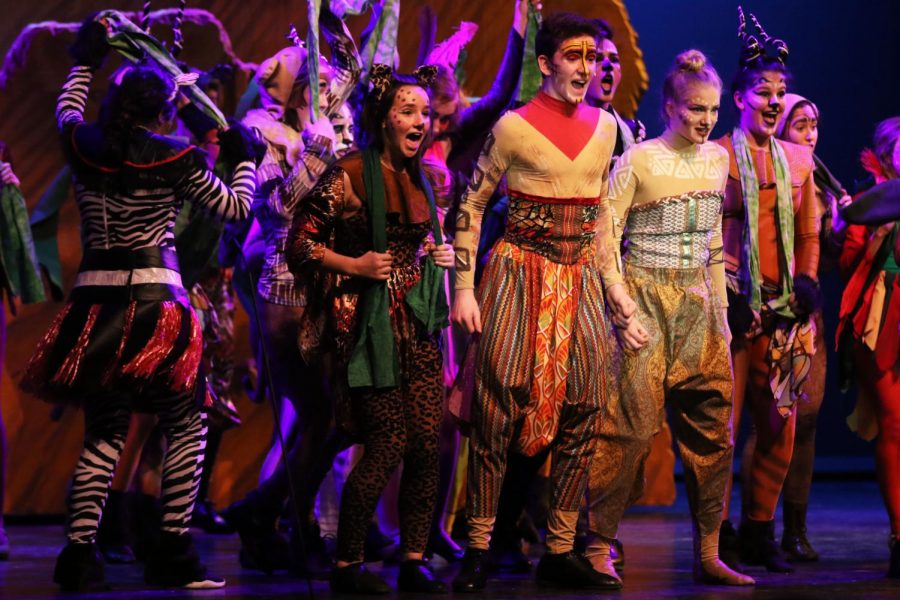 The Lion King Junior opens tonight in the Kennedy Auditorium. There are 42 cast members and 12 tech crew members, according to director Steve Tolly. Teacher Nick Hayes is the show's tech director.

Kennedy High School puts on one Playtime Poppy show each year, and the impact it leaves is tremendous — sometimes in unexpected ways. The show is a great opportunity to become closer with family, or friends, and according to the actors and the audience, is a great way to create bonds.

Abby Spore, so., and her younger sister Nikki, who is in 7th grade at Harding, often go to the Kennedy shows. Last year they went to Elf Jr. together.

Nikki commented, “It makes me think she doesn’t completely hate me when she asks me to go.”

Abby said that going to the shows brings the two closer. “It’s a lot of fun to get out since we don’t get to do a lot together.”

Another way this show impacts people is through the actors to the children.

How do actors and children interact?

Betsy Marlow, so., is involved in the fine arts many ways. Marlow is currently in Protégé, the junior varsity show choir, theatre, speech and choir. She has been in four shows at Kennedy, two of them Playtime Poppy productions.

Last year, during Elf Jr., Marlow was a member of the cast’s ensemble, a group made up of the show’s actors who don’t have named parts. She was a designated “roller skater” for the entire show. Following each Playtime Poppy show, cast members exit the theater and head into the Kennedy cafeteria where audience members can greet them. The actors sit around a cafeteria table and autograph books for the children.

Marlow says that during the book-signing, “Every kid loves you.” One little girl came up to her and said that Marlow was her favorite actor and, because of Marlow, the little girls wanted roller skates for Christmas.

“One character makes an entire show,” Marlow said. “I didn’t have a single line, but this little girl loved me because I had on roller skates.”

Marlow was inspired. She knew she had to continue to go forward in theatre and decided to keep auditioning for other Kennedy productions. She got into both the spring musical and the fall musical since then.

How do these shows affect the actors?

Sissy Wahe has a different perspective.

Wahe, sr., is involved in show choir, theatre, and speech, and she participated in each for all four years attending Kennedy. So far, she has been in 14 shows , four of them Playtime Poppy.

Similar to Marlow, Wahe was in Elf Jr. last year. Wahe describes how during certain parts of the production the actors would go into the aisles of the audience to dance, and all of the children would run to the aisles to get high fives from the actors.

One little girl really liked Wahe. After the show, the girl told everyone waiting for autographs in the cafeteria that she couldn’t wait to see Wahe. Though Wahe was at the back of the cast member line, the little girl waited and went through the whole line just to see Wahe.

This interaction brought Wahe to tears. She was so moved that she was the favorite character of this little girl who was determined and stayed in the whole line of about 40 actors before getting to meet Wahe.

Wahe describes the Poppy shows as having a different feel, which the actors try to really embrace, so that the kids will be even more entertained. “High school kids break out of their shells to entertain kids.”