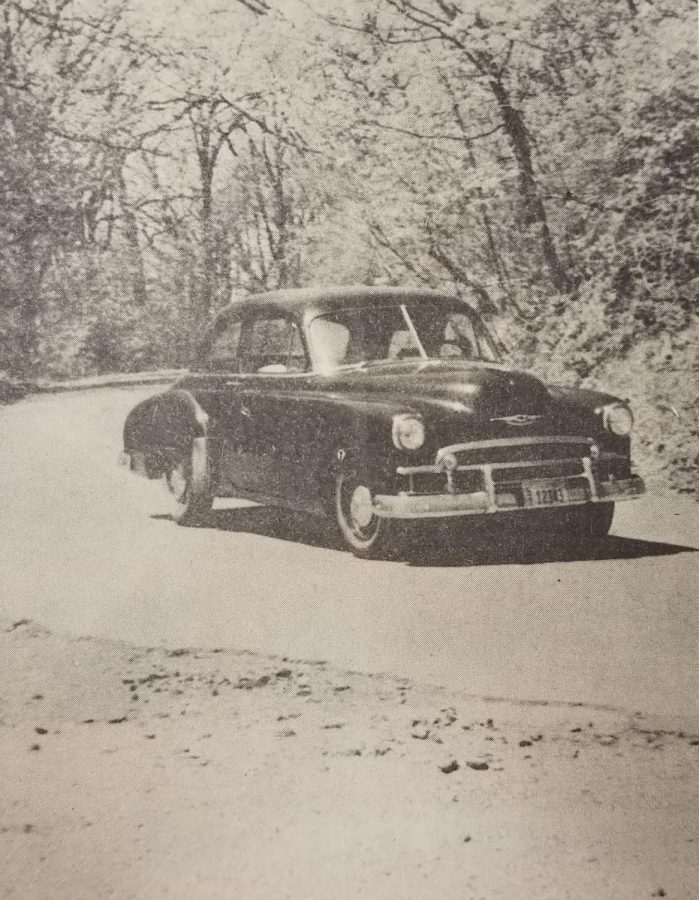 A winding road through a local park offers daring drivers a chance to test their nerves and skill.

Back in 1974 Kennedy students engaged in a different pastime than those typically seen today: Rally Driving. Students got an adrenaline rush racing around the course while others watched with excitement. But these rallies also had a dangerous side.

The following is pulled from Vol. VIII, Number 11 of the Kennedy High School Torch, published on Friday, May 10, 1974.

With the coming of spring at Kennedy, a type of spring fever seems to hit our local Mario Andrettis and A. J. Foyts, and it usually takes a visit from one of Newmire’s tow trucks to cure it.

Every year about this time Kennedy students hop in their cars and head out for the “rally,” a winding road full of hairpin curves located in one of our local wooded parks.

The “rally” earns its name from the fact that it doesn’t take a fast or powerful car to run the torturous course. The driver must rely instead on his car’s maneuvering ability and his own nerve and knowledge.

The object is fun in the form of excitement and competition. The competition can be against yourself trying for a new personal record or in a follow-race with another car. In the follow-race one car leads the entire way, trying to put distance between the following car. Then they do it again, exchanging positions and on-board judges using their visual measurement and memory to make the final decision.

When asked why they do it, most replied that the “rally” is exciting and challenging and that they like the competition. “Because it’s there,” one Kennedy student explained simply.

No matter how noble some of the reasons are, one thing is for sure: the “rally” is dangerous. This spring has already claimed one victim. This anonymous student nearly rolled a car by going too fast into a gravel turn and buried his wheels in a swamp.

No recorded history of the “rally” exists, but memories come up with somewhere between 12 to 14 accidents in the last two years.

One reason might be that a careless driver cannot financially afford too many accidents, much less the wrath of his or her parents if they find out. This leaves the “rally” for the better drivers.

Sportscars appear to have an edge on the larger popular sizes, but they may have to move over. There is rumored talk of some fast go-karts making the run. Maybe the other cars won’t have to move after all. With a little luck, the go-karts could zip right underneath. Beep-beep!