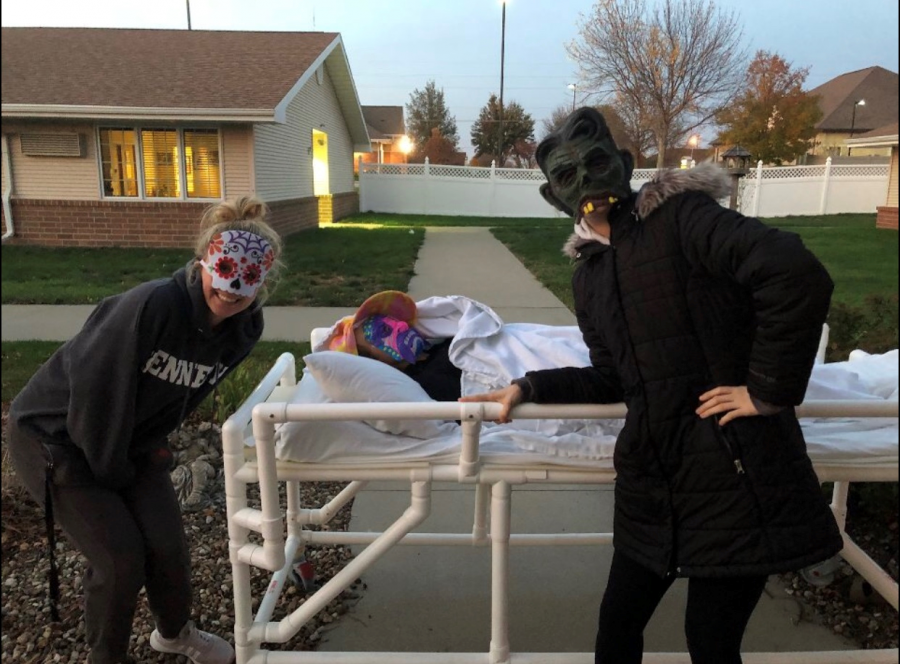 Hailey Dolphin, sr., and Olivia Haefner, jr., pose next to Gwyn Smith, jr., as she waits to put on a scare.

“It’s so much fun to see all the smiling faces of old people that might not be in the best health but still know how to have fun,” Cassidy Johnston, sr., said.

The “Spooky Garden” ventured through the halls of the nursing facility and made its way outside onto the patio of the care center. Members of the Kennedy volleyball team did their best to put on a scary show for everyone attending. A few hid behind the candy bowls and surprised the patients by grabbing their hand when they reached for candy. Others popped out from underneath benches, played the wind chimes, and one even played spooky music the piano.

“Seeing the old people jump and scream and then laugh it off is the best part,” Laila Sain, jr., said.

Most of the volleyball players were dressed in all black and had masks on, except for one person. Senior Shelby Cook was dressed in a gorilla suit and performed sneak attacks at the door throughout the entire night. Everyone had some sort of prop with them as well. Whether it was a doll, a pretend spider, or a fake hand or limb, it got a kick out of the elderly.

“Knowing that we are making their day is what makes this experience unbeatable,” Johnston said.

The “Spooky Garden” came to an end at about 8:30 p.m. After cleaning up, the volleyball team and the Hiawatha Care Center employees went inside to snack on cookies and Kool-Aid, which they called “ghoul-aid”.