Preparing for the ACT 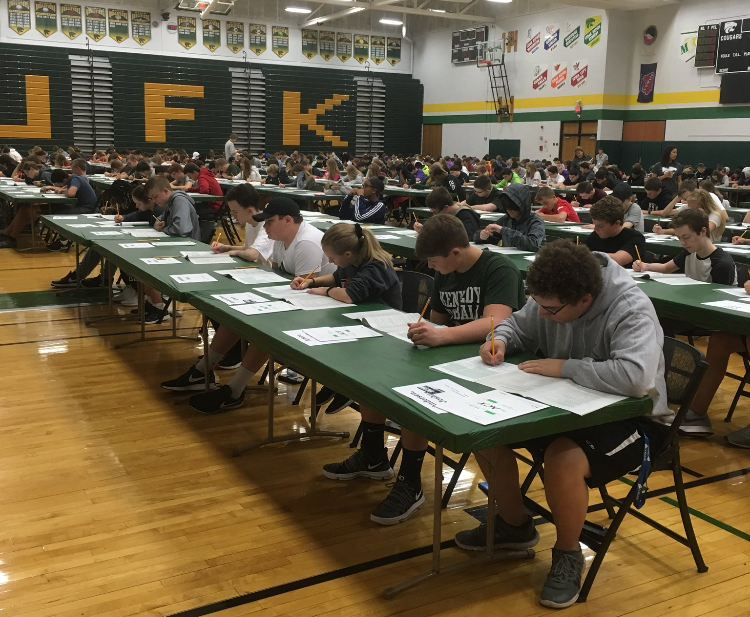 Student take the Pre- ACT in the main gym.

Kennedy sophomores took the Pre- ACT on Wednesday, Oct. 4 from 8-11:50 a.m. They were given English, Math, Reading and Science portions.

The Pre- ACT is taken by students to give them an idea of what they might score on the actual test taken when they are juniors and seniors.

“This test could be very useful for students depending on if they try or not. It can show us what to expect when we take the real ACT next year,” Sloane Ferring, so., said.

In homeroom, a few days before students took the test, students went over test taking strategies and study tools.

“I feel like homeroom didn’t help any sophomores at all,” Alan Kim, so., said. “They only told us test taking strategies. Maybe in the future they should specifically tell us what the test is like.”

The Pre- ACT cannot be used to score college credits, therefor there were many students that did not care what they scored. Other student say they did have enough notice before the test date.

“I don’t think many people studied because sophomores can’t earn scholarships based on scores,” Rose Svatek, so., said. “I didn’t study for the test because I didn’t even know about it until the Friday before.”

The ACT is scored on a 0 to 36 scale, 0 being the lowest and 36 being the highest possible score.

“I’m hoping to score above a 26 because I don’t really know what to expect. It was a great opportunity that Kennedy gave us the tests during school and for free when other schools have to sign up and take it outside of the school day,” Ferring said.

After taking the test, students were happy to be released from the gym and done with the “boring” and “mind numbling” tests.

“With studying beforehand and going through sophomore year, I’ll know more of the questions on the test next time because it will be covered in my classes,” Kim said.