50 Stories for 50 Years: Homecoming: The Same, Then and Now 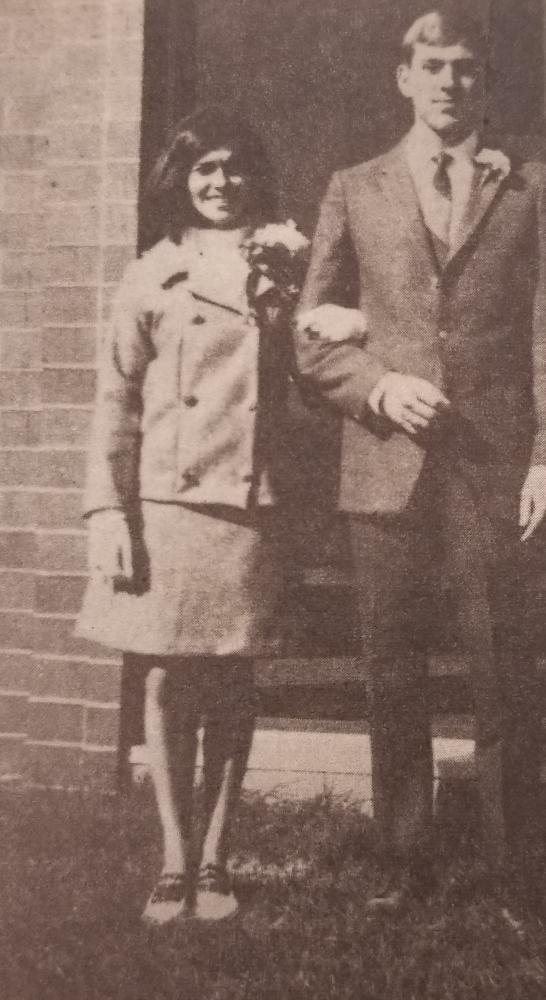 Dyan Kach and her escort, Rick Netolicky, after being presented to the 1967 Kennedy student body at a pep assembly.

Homecoming season is upon us and with it comes the choosing of the homecoming court. On Sept. 19, the second vote was cast by the senior and junior class to choose the top seven boys and girls.

On Tuesday, Sept. 26, an entire school assembly will be held, presenting the top 14 boys and girls. Following the ceremony, the student body will vote for this year’s King and Queen. They will be crowned between the sophomore and varsity football games on Thursday, Sept. 28.

Homecoming is a timeless tradition and in Kennedy’s first year, 1967, they held an Inaugural Ball in place of Homecoming. Although not everything was the same back then, today’s senior class has plenty in common with 1967’s.

You cannot have a homecoming unless there is someone to come home— so instead of having a homecoming for the first year, Kennedy Senior High School titled the festivities Inaugural Ball.

The weekend of festivities was highlighted by the crowning of Dyan Kach, Kennedy’s First Lady and the ball on Saturday, the day after the Moline-Kennedy game.

The candidates were presented to the student body at a Pep Rally and the Queen assembly Friday afternoon the day of the actual crowning. Escorts for the candidates were, seniors: Bruce Senti, Tim Keehn, Rick Netolicky, Steve Scott, and Klaus Schaeffer.

Master of ceremonies, student council President Tom Peckosh, asked each queen candidate to select a quotation from a container and to interpret its meaning. The candidates then selected questions from another container and answered them. These questions and quotation answers gave the student body and insight into the girls ideas and thoughts. Students then returned to their homerooms in order to cast their ballot.

The queen candidates were presented in 1967 Mercurys at Kingston stadium at half-time of the football game. First Lady, Dyan Kach was crowned by student body president, Tom Pecktosh. “I was so surprised but so happy,” Dyan Kach commented jubilantly. “I’d like to extend my extreme thanks to the whole student body.”

Things got rolling early Saturday morning by the student council social and committee headed by Sue Dall and Steve Scott. They decorated the cafeteria with gold and green streamers hung over the windows and a mock eternal flame was placed burning slowly on the patio.

“A Place in the Sun” served as the theme and the Host of Others provided music.

During the ball the candidates and the First Lady were presented. Football co-captains Dick Beltz and Jim Ryder danced with the First Lady.