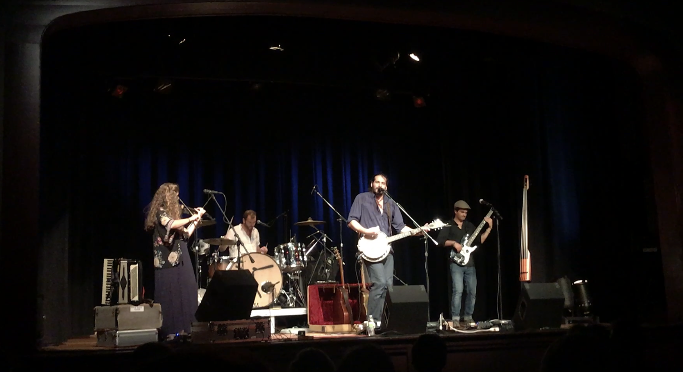 The Adam Ezra Group from Boston, sings to the crowd at the C.S.P.S. hall in downtown Cedar Rapids.

From guitars, a fiddle, drums, and bass, to an accordion, banjo, and harmonica- it’s safe to say that The Adam Ezra Group from Boston, Massachusetts had it all.  The talented group of four had an extremely genuine and down to earth feel about them, and the Cedar Rapids crowd was enjoying every minute they performed.

During the group’s song “Toast,” the lead singer Adam Ezra sang “Raise your glasses,” and the crowd did just that. When looking around C.S.P.S. Hall, the audience was completely engaged in the music and were swaying or bobbing their heads to the rhythm. Many people in the crowd (like myself), were videoing and trying to capture the moment, but I’m sure it won’t do the live performance much justice.

The Adam Ezra Group consisted of 3 men and one woman, all equally talented. Being and Indie band, their clothing style was very casual and almost a little old school. Corinna Smith who played the fiddle and accordion was wearing a floral shall and flowy skirt, with minimal makeup and natural hair. Adam Ezra, the lead singer and guitarist had a trendy man bun, necklaces, a casual button down shirt and was barefoot throughout the performance. I enjoyed the bands authenticity and felt that the group seemed inviting with their laid back and unique style.

Unlike some performers, the Adam Ezra Group was very appreciative of the audiences’ attendance, and encouraged everyone to take a CD, even if they had no money to put in their donation box. They even took the time to come sing in the middle of the crowd towards the end. “Let It Be” by the Beatles was their closing song, and the crowd was able to sing along with them. Seeing everybody’s genuine smiles and happiness as they sang with the group was incredibly cool and unlike past concerts I’ve attended.

“It’s one of those nights where I feel like I could play forever,” Adam Ezra, lead singer, said to the crowd.

Check out one their songs “Let Your Hair Down” here.