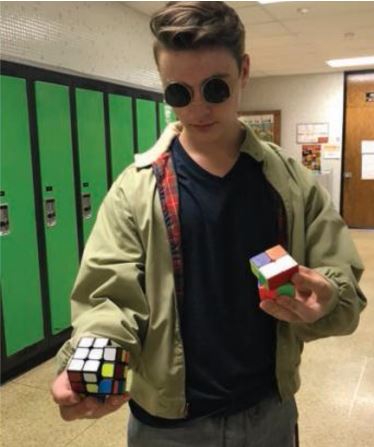 Jacob Kiesey became interested in the yo-yo when he saw other people bringing them to school.

Walking through the halls of Kennedy High School, you may notice some students solving Rubik’s cubes or doing yo-yo tricks. Jacob Kiesey, so., is one of those students.

“It seems like something that always amazes people,” Kiesey enjoys the challenge and problem solving that comes with solving a Rubik’s cube.

When he first became interested in solving the Rubik’s Cube, he spent a lot of time figuring out the basics of solving it. “I spent two hours one night just figuring it out,” Kiesey said.

After working it out on his own for a day, a friend of his directed him to a website containing various algorithms.

An algorithm is a set of movements to get a piece of the Rubik’s cube to a certain place. The algorithms used to solve Rubik’s cubes are identified by certain combinations of letters, each of which stands for a certain movement.

“U” means up, “D” means down, “L” means left, “R” means right, “F” means front, and “B” means back. Each letter in the algorithm tells you to turn the cube ninety degrees clockwise in the indicated direction. If a letter is followed by an apostrophe it means that you turn the piece counterclockwise.

With the yo-yo, Kiesey saw that it was something different, and how he’s always enjoyed trying new things.

Kiesey became interested in the yo-yo when he saw other people bringing them to school. Almost immediately he decided that he wanted to know how to do it, too. He likes to learn new things and thinks it’s fun.

There are two types of yo-yos: responsive and unresponsive. The difference is that while a responsive yo-yo will come back to the hand with a tug, the unresponsive one won’t.

A front mount bind, more commonly known as binding it, is a maneuver in which you catch the yo-yo on the string causing it to coil up and return to your hand. This maneuver is used to bring back unresponsive yo-yos.

Kiesey said that he enjoyed it while it lasted and looks forward to moving forward and trying out the next new thing.