Review: ‘Benefit’ Mascara to Die For 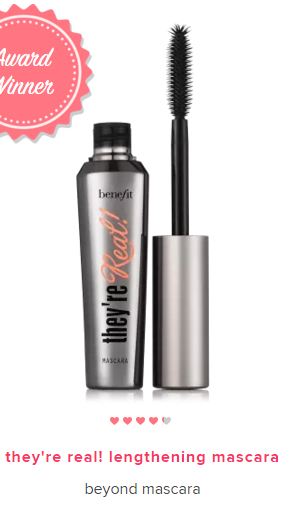 Product review: the brush is super bristly and fun, which is good because it's supposed to be a volumizing mascara. The brush isn't too gooey when you pull it out, either.

It’s most known product is the “They’re Real! Mascara”, which is ranked as the #1 best-selling Prestige Mascara in the United States for three years running. This mascara sells for $24 on their website.

I was introduced to this product by one of my friends who said that it was, “worth a buy, because it’s super great and easy to brighten up your eyes.”

After trying for myself, I have to agree.

I bought the full tube online about a week ago and it got here in about four business days. It came in a black box, and the mascara itself is a shiny silver tube with the “They’re Real!” logo on it. The design is sleek and pretty.

The brush is super bristly and fun, which is good because it’s supposed to be a volumizing mascara. The brush isn’t too gooey when you pull it out, either.

After one sweep on each lid, I can definitely say that it lives to its potential. I can see a big difference between my normal eyelashes and the eyelashes from “They’re Real!” However, after one or two sweeps, the lashes tend to get clumped a lot. The lashes do become much longer, but they just feel a little gross.

I give this product a 4 out of 5 stars. Knowing what I know now from using this product, I’d get the smaller travel tube, just because I probably won’t use it that much, as it’s good if you’re in a time crunch and need a quick fix.

I recommend this product, and I look forward to using it in some of my routines.