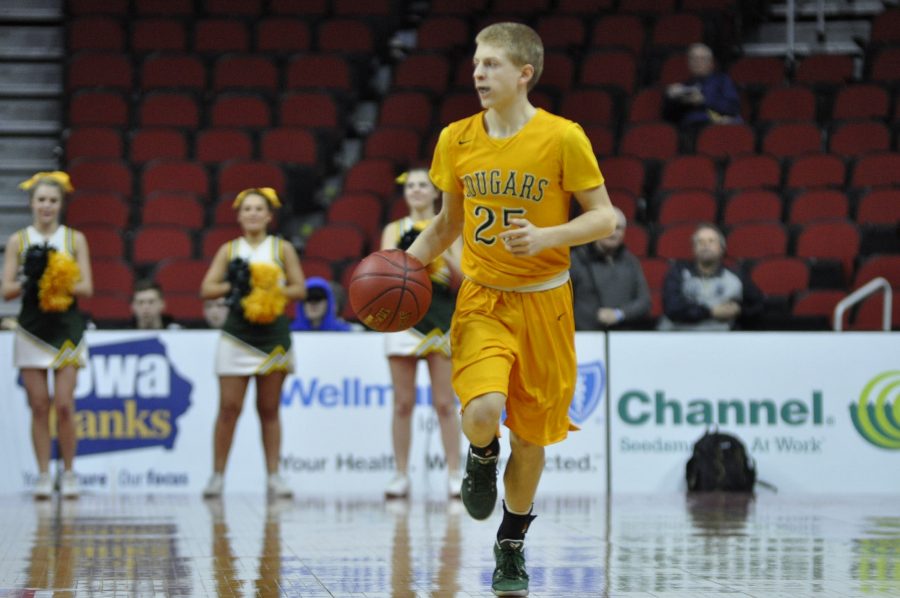 Jackson foley (25) dribbles up the court during the first game of the state tournament. Foley finished the game with 14 points. Photo by Nathan Sheeley.

Some of Jackson Foley’s  first memories of basketball include getting yelled at for dribbling with two hands and not wanting to get the ball. This year as a junior, he lead 4A in three pointers during the state tournament and won KCRG Athlete of the Week.

Foley was a key piece in a 21 point comeback vs. Dubuque Hempstead in the first round of the state tournament. That comeback is the largest in IHSAA basketball history.

“That game is just so surreal because we never felt like it was over. It really was a great representation of our season as a whole,” Foley said.

Foley also runs cross country and track for the Cougars. This year he finished 16th at the cross country district meet, needing only one place higher to qualify for state. Next year he wants to qualify with his team.

“Kennedy hasn’t been to state since 2006 so getting back there would be a great feeling,” Foley said.

Foley doesn’t have a true off-season but he said it’s beneficial because he enters each season already in shape. Each sport presents its own challenges but Foley feels like cross country is the most intense.

“In the fall it will be 100 degrees one day and 40 the next so that’s always tough. We do a lot of mileage long runs that can be up to 10 miles,” Foley said.

Foley still has a year to make up his mind but he hopes to continue his athletic career in college.

“Playing in college has been a dream of mine,” Foley said. “I’m open to anything, we will see what happens.”