Survive and Move On 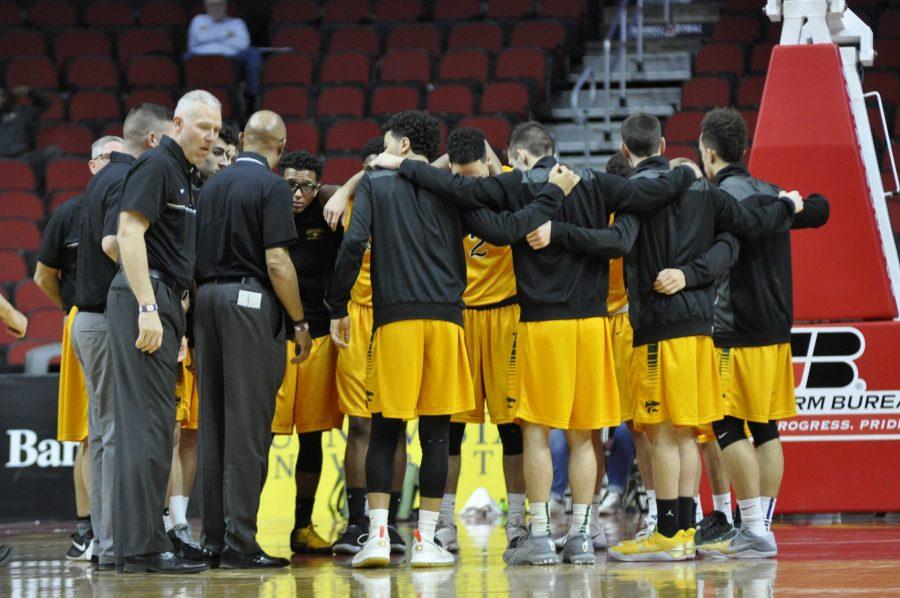 Kennedy made its second state appearance in three years with a win over Cedar Falls last week. Photo by Nathan Sheeley.

With under four minutes to go in the first half against a Dubuque Hempstead (18-6) team that beat them in the regular season, the Kennedy Men’s Basketball Team (19-5) found itself trailing 32-11 on the biggest stage of all, the state tournament.

Following a 14-point run by the Mustangs, the Kennedy fan section was left speechless, and the team seemingly had no answers for the fourth-seeded team.

Dubuque Hempstead’s Curtis Martin III hit consecutive 3-pointers on his way to a 19-point first half showing, and it seemed as if the Mustangs would run away with the quarterfinal.

Kennedy closed the gap, finishing the first half on a 9-2 run, but still trailed by 14 heading into the break. Despite the late run, Kennedy managed to knock down just 17% of their shots in the first half, going 3-of-17 from the field, and 1-of-8 from beyond the three point line.

“We didn’t make any big changes really,” Matt Berst, sr., said, “We just got back to playing our (Kennedy) basketball and just try to win one possession at a time.”

The game plan seemed to work for Kennedy, as they came out of the halftime break with renewed energy, soaring to a 15-0 run in the first four minutes of the third quarter, leading 35-34 with under three minutes to go in the quarter.

“We just needed to calm down and play our game,” Ryan King, sr., said.

Three Dubuque Hempstead players found themselves in foul trouble early, each picking up three fouls before halftime, and each fouling out, including Martin III (2), Marshon Crowder (12), and Lucas Duax (5).

At the end of three quarters, Dubuque Hempstead saw their 21-point lead vanish due to a stalled offense that mustered just four points in the third quarter.

Curtis III couldn’t get going in the second half, scoring 0 points and eventually fouling out in the fourth quarter. Kennedy lead 39-36 entering the final quarter, and never looked back.

“The crowd definitely gives you momentum and energy,” said Berst.

Kennedy found their rhythm in the second half, going 9-of-17 from the field, shooting nearly 53 percent, and even better from deep, going 4-of-7 for a much-improved 57 percent.

The red-hot offense took off, outscoring the Mustangs by a score of 44-15 during the last 20 minutes of the game, capping the biggest comeback in tournament history. The previous record-holder, Cedar Rapids Jefferson, came back from 15 down against Ames in the 1967 championship game to force overtime and eventually claim the state crown.

The Cougars lead throughout the second half, extending their lead by as much as seven, and free throws from Drake Brewster, sr., and Derrick Diggins, jr., sealed the win late.

Kennedy advances to play the number one seed Iowa City West on Friday, March 10, at 1:30 p.m., for a chance to play in the Cougars’ first title game since 1988. The Cougars fell to the Trojans in January, but say past performances are not indicative of future success.

“We are playing much better now than we were in January, but we believe our best basketball is yet to come,” said King.

The Cougars are just two days away from another matchup, looking for revenge, and for the experienced members of the team, there is no need for extra motivation.

“We are much more motivated by being two games away from a state title than we were being ranked first back in January,” said King.

Kennedy looks to continue their recent success, as they have won their last nine games.

“We are going to play our game, do the little things, and leave it all out on the court,” Berst said, “We are very confident with where we are at right now.”