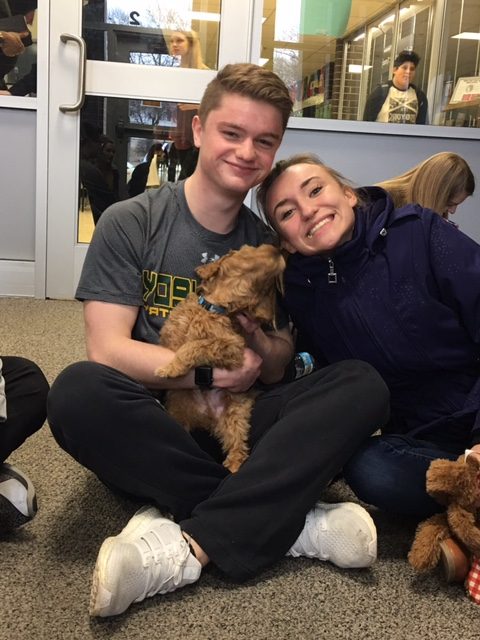 Jackson Middlekauff (left), sr., and Jazmine Loomis, sr., play with one of the 8-week old puppies.

Only 15 people got to be on the list as a first-come, first-served basis to see the unique SMART Time experience: Puppies.

“The puppies are here for socialization before they go to their new homes,” said Whitney Chardoulias, who organized the training event. Chardoulias is a photographer and raises Australian Labradoodles.

The 8-week old furballs were brought here Feb. 1 during SMART Time to interact with students.

Due to the event’s popularity, Principal Jason Kline had to make restrictions on who would be able to play with the puppies.

“I didn’t know it would receive as much attention as it did,” Kline said. “When I saw the tweet climb to over 100 likes I knew something had to be put in place so a mob of 500 students wouldn’t come to see the puppies.”

Being born close to Christmas, some of the puppies were donning names that fit in with the holiday. Donner, Rizzo, Noel, Oakley, and Dash are all sold and plan to go to their families soon.

“I think this is the best thing that has happened to Kennedy. I am so happy,” Sydney Koeppen, sr., said.

Students sat in a circle while the puppies pranced around them, the “doodles” sometimes losing balance and rolling to their sides.

“I think we should have puppies around finals time. It would release a lot of my stress from having to take multiple tests in a day,”  Jazmine Loomis, sr., said.

As for the future of puppy socialization, Kline expects to make a better plan to enable more students to participate.
“If we have an event like this again, I hope to create sessions or have students take turns coming in so that more people can see them,” Kline said.

There were ten puppies in this litter: nine boys, and one girl. This is typical for the litter size of their Labradoodle mother. pic.twitter.com/j8tQEBd5tW

All the puppies will be eight weeks tomorrow. They are being socialized to prepare them for therapy work across the country. pic.twitter.com/NKsG1meZEd