A behind the scene's look into the world of show choir at Kennedy High School. 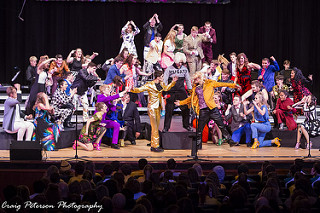 Show choir can seem — to any outsiders to the extracurricular — like a weird and cult-like activity.

Choir kids race down the hallways of school singing, the yellow jackets blind the school on days before competitions, and it’s not unusual for someone in show choir to break out in dance sporadically.

It can also be confusing, as despite its competitive form, as the scoring done at competitions is entirely objective, making each performance a bit more stress-inducing.

“I think that other people think show choir is easy, or that it isn’t as hard as other sports,” Kira Manuel, fr., a member of Chanteurs, said. “What people don’t realize is how much work show choir really is. It takes a lot of time and effort to get a show together, and being able to sing and dance takes a lot of stamina.”

How long exactly does it take to put a show together?

Kennedy’s show choirs each start with a choreography camp, where members learn the choreography to their shows. A show typically consists of four dance intensive songs, split by a vocally-challenging ballad. These four dance songs are fully choreographed by professional choreographers who are often hired and flown in from out-of-state to work with students.

While Chanteurs and Protégé (Kennedy’s prep division show choir) have their choreography camps split up throughout the school year (with the first camp typically taking place in the summer or late august), the varsity show choir members learns half of their show in a mere week, an endeavor known as ‘Damon Camp’ (named after the choreographer).

“Camp can be really stressful because not only are you doing crazy dancing and competing for the best spots, but you have to remember all of the choreography that you just learned, which can be a lot harder than it sounds,” Ferin Bergin, jr., said.

Beyond choreography camp, performers put in work on diction in vocals, cleaning choreography, and general practice of the show to commit it to nearly muscle memory.

“We spend around five to six hours a week, including practicing outside of practice. Around 150-200 hours a season (end of August to beginning of March), not including class during the day,” Alexis Weissenberger, sr., said.

The show involves more than just singing and dancing, though.

All of this work leads up to the large competitions that really signify the start of the season.

“At show choir competitions we are divided into different classes based on our age, and then judges judge us by score sheets that check our vocals, choreography, visuals, band, and everything else that makes our show. Then they add up those scores and place us,” Carson Uthe, so., member of Protege, said.

“The rush of the competitions and performances is my favorite part of show choir. Everything you worked for finally pays off and you get to play a completely different character,” Katie Beer, sr., member of Happiness, said.

“My favorite part of show choir is getting to meet new people, and getting to entertain the audience and spread happiness through our show,” Bergin said of the Happiness experiences. “I have met all of my best friends, and to be quite honest, pretty much all of my friends at show choir.”

“I love that show choir creates almost more of a team environment then other activities,” Uthe said. “No one is against each other, and no one ‘sits out on the bench’ at competitions. We all have to be doing our best to be successful.”