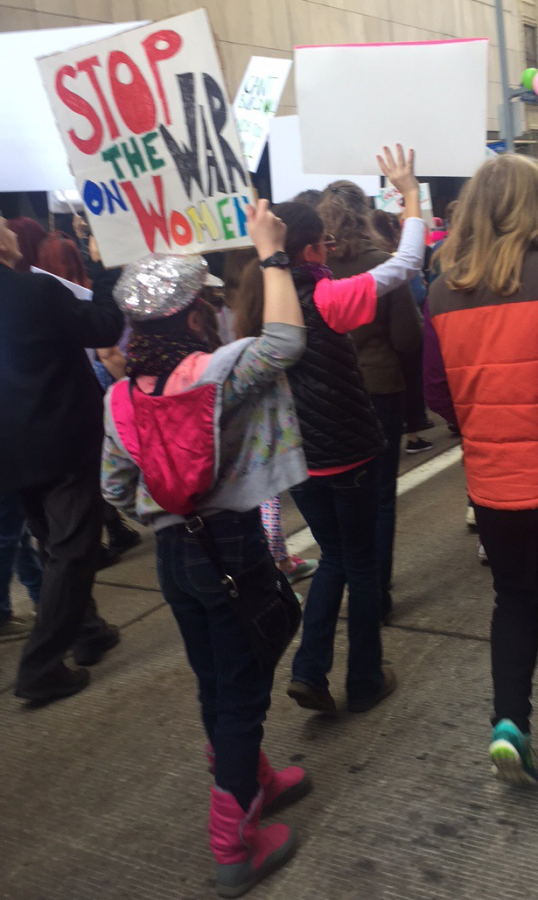 An 8-year-old girl protests in Pittsburgh showing her support for women's rights.

Since Jan. 20, President Donald Trump has managed to be the cause of the largest day of protests in U.S. history. Over three million protesters, men and women, gathered in cities around the world to show their support for women’s rights and even some hate for the president.

One of many protests was held in downtown Pittsburgh. Linden Runels, 2016 Kennedy graduate and now a freshman at Carnegie Mellon University, participated in this protest of about 5,000 people.

“There were all types of people protesting, people from all walks of life,” Runels said. “I was walking behind a girl who was probably eight years old. There were also many men there which I thought was important.”

The largest protest took place in Los Angeles having over one million people attend. Washington D.C. was a close second and New York came in third. Even places like London, Argentina, and Antarctica participated in these protests.

“It is just so awesome to see all these people coming together and fighting the abuse of power by our government,” Runels said. “These protests have made me feel better in knowing that I’m not alone in my thoughts about our government and that there are millions of others who feel and think the exact same way.”

There was a variety of famous figures involved in these protests. Madonna, Demi Lovato, Amy Schumer, and many more were impactful speakers at different protests around the country. Emma Watson, James Franco, Miley Cyrus, Alicia Keys, and hundreds more attended.

“The majority of the protest was about the degrading comments President Trump has made towards women and how it’s not acceptable. There were some very funny signs at the protest and while most of them were cruel, they got to the point,” Runels said.

We have been seeing mixed emotions and reactions on social media from President Trump. On Jan. 22, he tweeted, “Watched protests yesterday but was under the impression that we just had an election! Why didn’t these people vote? Celebs hurt cause badly.” Also, on Jan. 27  he tweeted, “The #MarchForLife is so important. To all of you marching — you have my full support!”

Trump has already made some big presidential decisions that many people agree with and many people disagree with. Protests may continue and women all over the world are continuing to stand up for their rights.