Sparky’s main job is to be there for his owner, Joey. 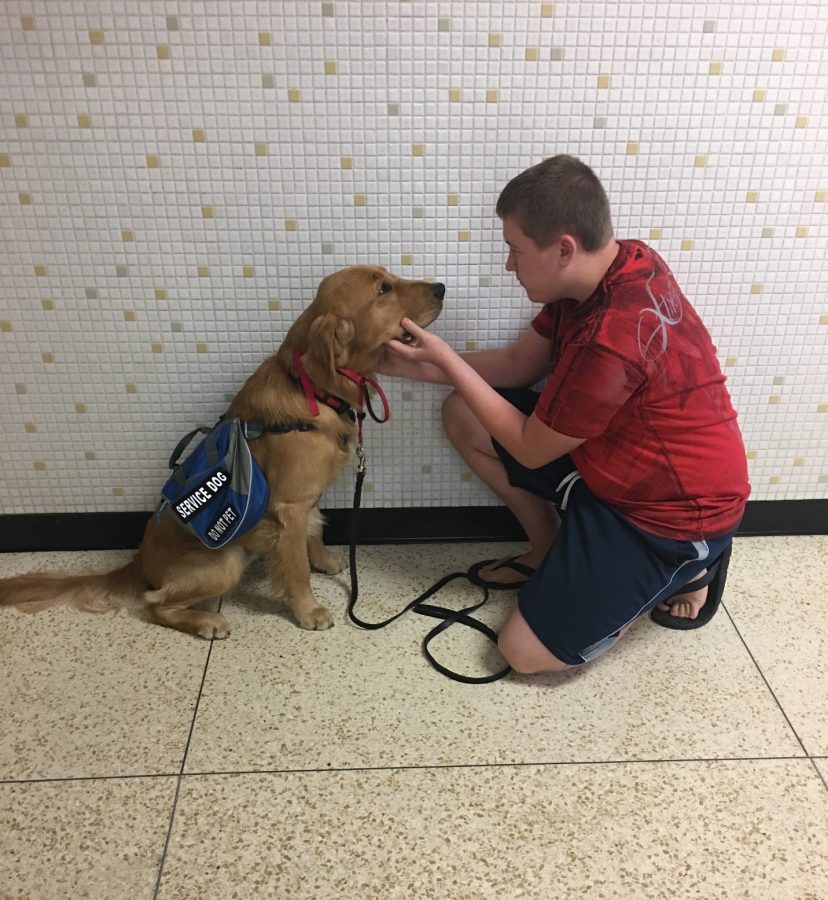 You may have seen Joey walking through the halls of Kennedy with his service dog.

“My dog helps me with my anxiety,” said Joey Damisch, so. “I get nervous so I have Sparky with me so I don’t get really nervous.”

Sparky is a nine month old Golden Retriever. He was trained to be a service dog when he was four months old by Tory Topping at Stone Hollow Training in Cascade, Iowa. Sparky was brought into the Damisch family as a puppy for the intention of being Joey’s service dog.

“We drove there and sometimes they would have Sparky for one to two weeks at a time for training,” said Sara Beth Damisch. Sara Beth is Joey’s sister and a senior at Kennedy. “Tory trained him and then whenever we went to go pick Sparky up, Tory would go over what he trained Sparky with and told Joey how to do things.”

Service dogs help with performing a function for a person that is limited with a disability. United States Dog Registry describes a service dog can be helpful to people with visual, hearing, and mobility impairments. Also, service dogs can help people that have mental or physical disabilities, such as diabetes, PTSD, autism, and epilepsy.

“We got Sparky for Joey’s anxiety but also he tends to lose things and is disorganized sometimes so Sparky’s backpack keeps Joey’s important stuff like his planner, phone, pencils, and anything else important,” Sara Beth said. “Sparky holds a lot of things for Joey throughout the school day.”

Students and teachers are not allowed to pet Sparky.

“If Sparky was pet it will mess up his training and he won’t listen to me,” Joey said.

Sparky will get sidetracked and it can distract him from his main job which is being next to Joey.

“If students were to come up and start petting him, Sparky would lose track of where Joey is supposed to be going,” Sara Beth said.

Sparky lives a double life. In public, he is Joey’s service dog, but when Sparky is at home he is just another family pet.

Joey said it’s not hard having Sparky in school and during passing time because he is trained to be right next to him.

“Sometimes Sparky doesn’t want to stay still in class, sometimes he gets a little scared and when there’s a lot of loud things I try to calm him down,” Joey said. “He is always there for me. I just love him.”