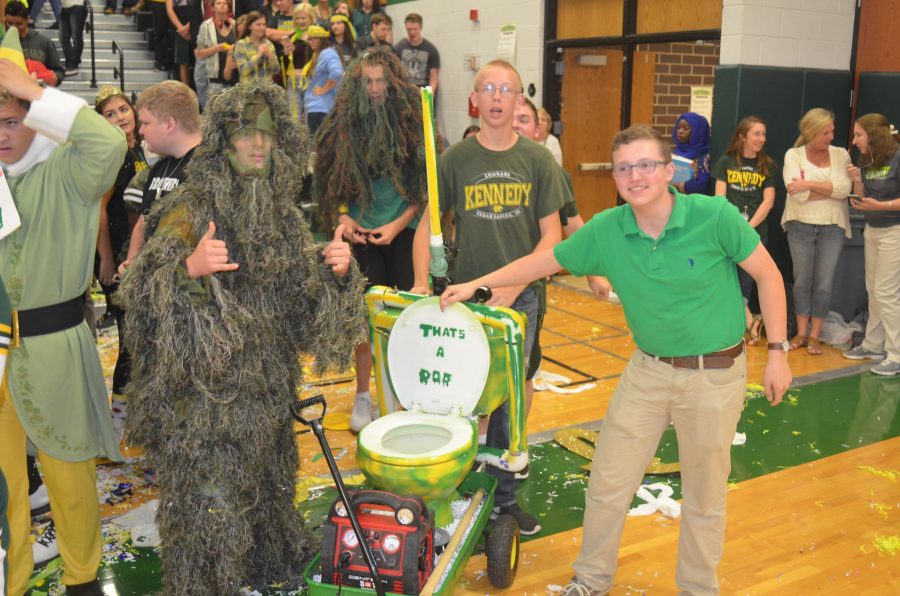 Twenty hours of work and $300 is what it took for juniors Joey Buschman and Tony Farrington to win a point for their class during the fall pep assembly.

When Activities Director Aaron Stecker asked for a person to come up from each class with the most green and gold, Buschman was wheeled out on a toilet he created with Farrington.

“I launched confetti into the air and I could here my class going crazy when we got the point,” Buschman said.

This “point” ended up giving the junior class a one point lead and the spirit stick.

The boys were sitting in Panchero’s when they started brainstorming for what they should do at the pep assembly.

“John Nolan and his bike inspired us to make something cool,” Farrington said. “We had a few other ideas but we came up with a cannon toilet that shoots confetti.”

Farrington was in charge of the electrical side of things while Buschman handled the constructive aspects.

“The piping was easy after that,” Buschman said.

Farrington’s dad owns American Baking Systems so he has been around electrical projects much of his life.

Over two weeks the boys bought roughly $300 of supplies but only $10 went to the toilet itself. The rest of the supplies included an air compressor, PVC pipe, a sprinkler valve, and an air horn.

“The majority of the time we spent was going around and getting supplies since we didn’t have a set plan for the cannon at the beginning,” Buschman said.

As a finishing touch to the spray-painted toilet they wrote “That’s a doo” on the inside lid of the toilet.

Buschman currently has the toilet which they are waiting to revise for the next pep assembly.

“I won’t say anything specific but there will be a big boom, a very big boom,” Farrrington said. “Call it a Christmas special.”