The ducks are stuck 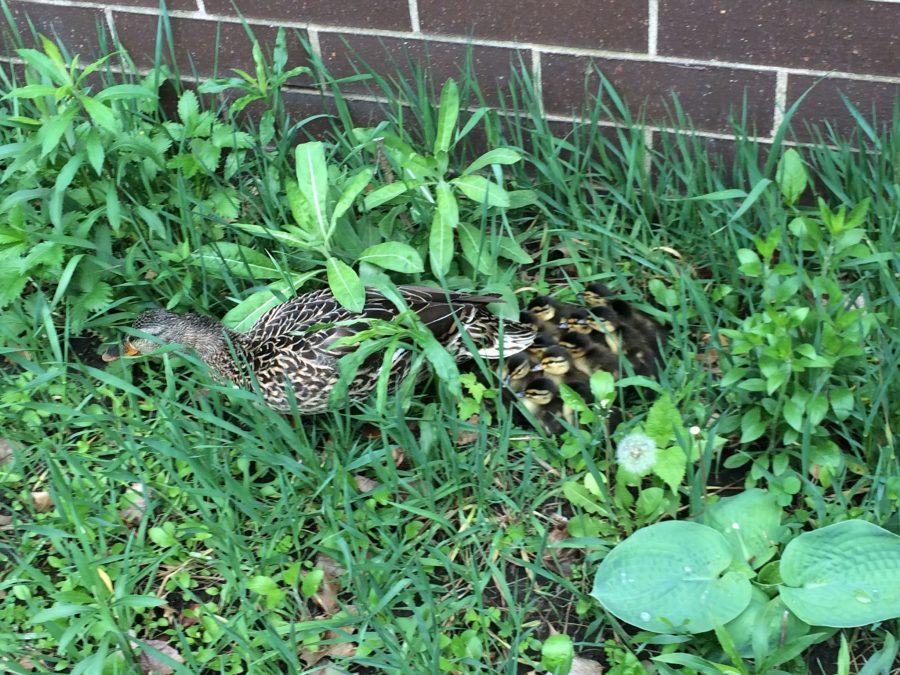 A mama duck and several ducklings take shelter in the corner of the Kennedy courtyard. They were discovered this morning and later ushered to safety.

Updated:
The ducks are (un) stuck
Click here for a video of the duckling rescue.

A note from the Kennedy administration announces on the YouTube video link: “A mother duck built a nest in our enclosed courtyard. We discovered the ducklings today and our brave SROs (School Resource Offiers) led them to freedom!” Kennedy SROs Aaron Leisenger and Charity Hansel as well as several administrators and staff members assisted in the duckling rescue.

Waddling around our school lately are some new friends of ours with one peculiar characteristic– squawks. A mama duck and her ducklings are nestled in the school’s garden courtyard area near a south end Kennedy classroom room.

“When I saw the ducks outside the window from the Torch room it was a nice surprise,” Taylor Weiss, jr., said. Weiss and fellow students alerted the main office of the discovery.

Onlookers speculate that the mama duck flew into the courtyard where she made a nest, the ducks hatched, and now the young family finds itself stuck.

About a dozen ducklings now follow their mom around the courtyard, a patio area that has an open roof area, but one that is enclosed on all four sides. The patio does not not have any easy getaway for the ducks–at least for the yet-to-fly ducklings.

“The ducks are safe right now, but we will find out a humane way to get them out,” Associate Principal Jim Muench said.

Watch out for the ducks on your commute to classes.

“It’s crazy how fast they moved and how the ducklings follow every move that the mom makes,” Weiss said.