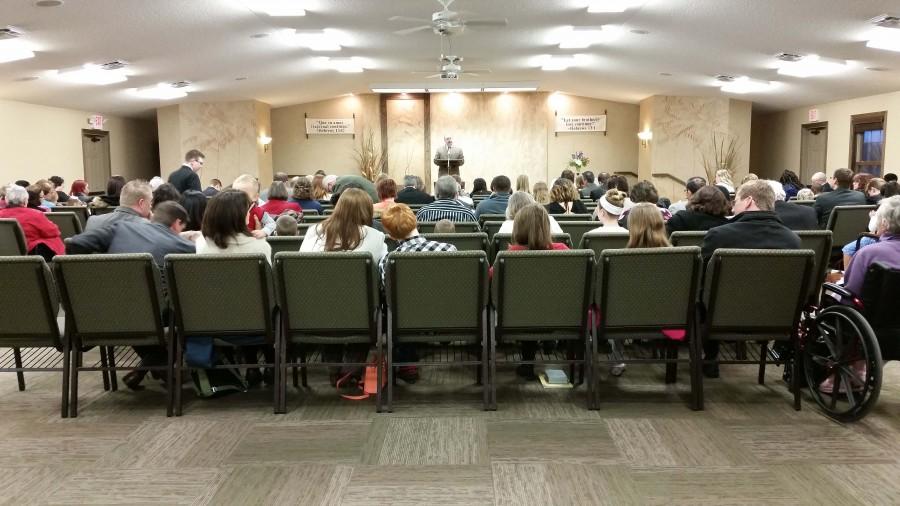 While most Christian religions prepare to celebrate Easter this Sunday, one denomination gathered tonight for a different celebration.

Every year, Jehovah’s Witnesses gather to commemorate the Memorial.

Gavin Lewis, fr., is one of three Jehovah’s Witnesses at Kennedy. He’s attended the Memorial for the past 15 years.

“The Memorial is an event where we commemorate Jesus’ death,” Lewis said.

Lewis is a member of the McCloud Springs Congregation of Jehovah’s Witnesses, which encompasses northeast Cedar Rapids, Hiawatha, Robins, Toddville, Center Point, and Walker. This congregation is made up of about 100 members, and their Memorial was attended by 197 people, some there for the first time, some who’d been coming since as far back as 1938. Worldwide, last year’s Memorial was attended by 19.8 million people in 236 countries.

“My favorite thing [about the Memorial] is we have so many visitors come, we get to meet a lot of new people,” Chandra Riley said.

Riley has been a Witness her whole life, and this was her 43rd time attending the Memorial. Even though it happens around the same time as Easter, she explained that it’s not the same at all.

“The Memorial focuses on Jesus’ death as opposed to his resurrection, and we read several scriptures about how important Jesus’ sacrifice is,” Riley said. “This is the one event that the Bible commands Christians to celebrate, which emphasizes how important it is.”

The Memorial is always a special time for Jehovah’s Witnesses, and Lewis said that one especially important Memorial for him was the one held in 2014.

“Two years ago my uncle Dan gave the talk and that was the first time I listened and paid attention fully. What he said was really special,” Lewis said.

In addition to a Bible-based talk, the Memorial involves observance of the Last Supper, where bread and wine are passed around.

Riley was asked this year to prepare the bread.

“It’s very simple. It’s whole wheat flour and water that you knead, you roll it very thin, and you bake it and break it,” Riley said.

“It’s kinda cool to pass around the bread and the wine. It’s a special moment because it only happens once a year,” Lewis said.