Doctors’ report: Without surgery, he may never walk or talk 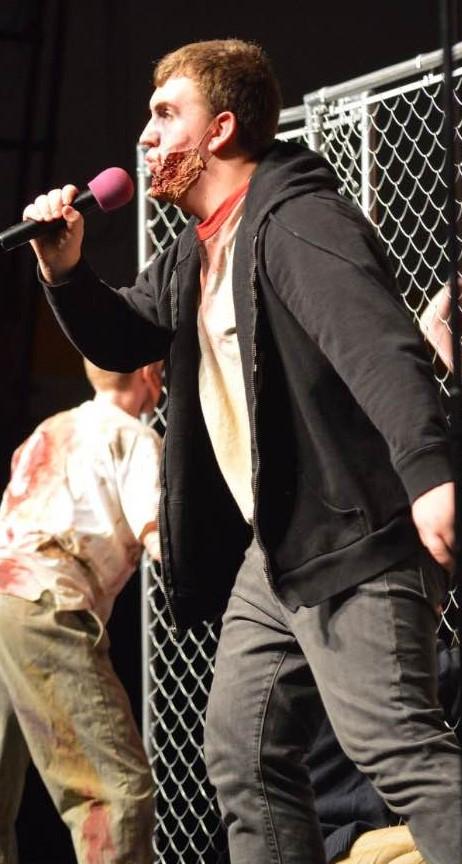 Kyle Minor, sr., performs a solo for Happiness, Inc. at the Raise the Roof Show Choir Invitational on Feb. 27.

You’d never guess that Kyle Minor, sr., has had his skull cracked open by surgeons five times in 17 years. He’s otherwise a typical Kennedy student, involved in Happiness show choir, and with plans to attend college next fall at Mount Mercy University in Cedar Rapids.

“Surgery could have severely handicapped me, as far as mental abilities or physical abilities,” Minor said. “But I was actually told that if I didn’t have the surgery, I might not be able to walk or talk in my life.”

Minor had an Arachnoid cyst in his brain that doctors found when he was about 16 months old. An Arachnoid cyst is typically located between the skull and the brain, and is filled with spinal fluid.

“They had to find a way to shrink it as much as they could, or remove it,” Minor said.

Minor’s surgeries started as an infant, and continued throughout his adolescent years. His most recent was when he was 12.

“The process depended on the surgery. So what they tried to do with the shunt was they went in and basically put in a thing that will drain fluid from my brain,”  Minor said. “They connected tubes from my stomach up to my brain and whenever fluid gets in there it is meant to drain it out and I don’t feel anything. It just kind of happens as needed.”

Minor describes each of his surgeries as successful, but there were some complications in the process.

“The first three surgeries went totally as planned, they said everything’s great. The second round of surgeries I had, the first was unsuccessful when they tried to replace the shunt,” Minor said. “While I was in surgery, one of the surgeons snipped the optic nerve in my right eye and it totally shut it down, so I no longer have vision in my right eye.”

“My mom told me more about the process as I got older, kind of more what it was about,” Minor said. “I just remember as a kid I was really scared because I didn’t know what was happening, but as I found out what it was about it’s made it a little easier to understand why I needed to have it.”