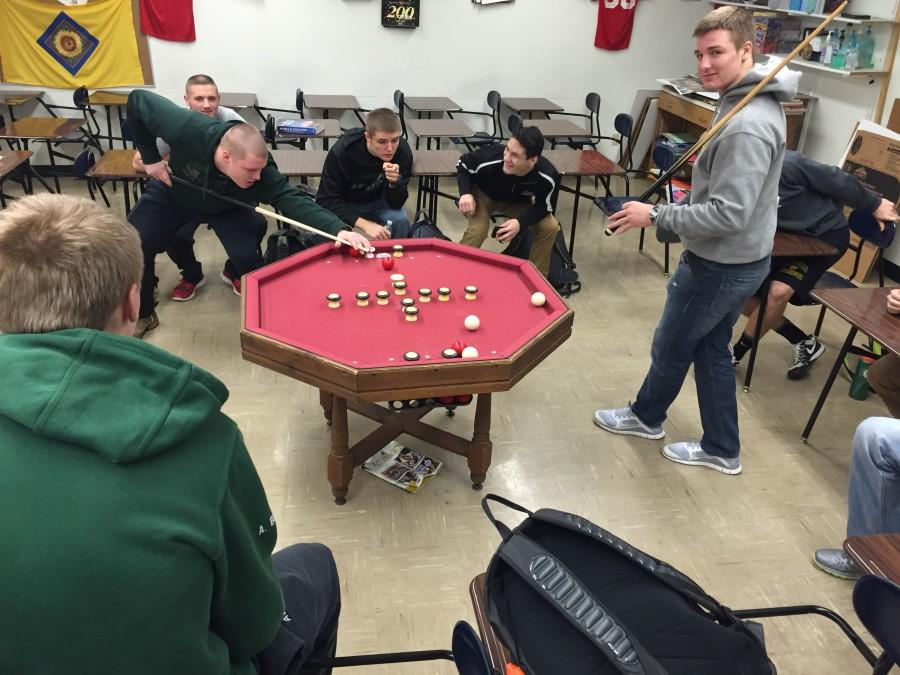 Overcrowding in the cafeteria has become a big SMART lunch problem this year. To help combat this, some of the teachers have different activities in their classrooms available during SMART lunch.

Patrick Grady’s ping pong table has been a Kennedy High School staple for generations. These days students use it for more than just desk space. Grady’s economics students are welcome to come in and play whenever they have open lunch time. However, no one is allowed to play during scheduled social studies tutorials.

Grady’s classes are so large that the ping pong table was set up so kids can sit around it, and they still do, according to Grady. While other teachers have brought in things specifically for SMART lunch times, Grady has had the “AP lounge” open to kids for years.

“If these guys come in here to hang out, just maybe, they will talk about economics,” Grady said.

Tony Vis’ wife wanted their bumper pool table out of the house, but he couldn’t just get rid of it. His solution? Put it in his classroom.

Most days before school and during SMART lunch, there is a crowd of students in Vis’ classroom.

“It’s consistently the same 20 or so junior and senior boys,” Vis said.

Every few weeks Vis creates a bracket of the top eight players to play a tournament. Matt Gardner, sr., and Brandon Niemeier, sr., are regular participants. Every day before school they play bumper pool, and during SMART lunch they can usually be found in the “AP lounge”.

Gardner holds a second place title as well as a champion title from bumper pool tournaments. This season, their seventh, Gardner seated ninth, just outside the bracket. Gardner began playing in Vis’ class during freshman orientation. The pool table was stumbled upon and, according to Gardner, “it was a good time.”

Niemeier went 17-0 until the championship game of the first season. He choked and his career has fallen since. Niemeier currently holds no titles. However, he and Gardner claim to be “the best two v. two team in the school” and they issue a challenge to anyone who would like to take their “title.”