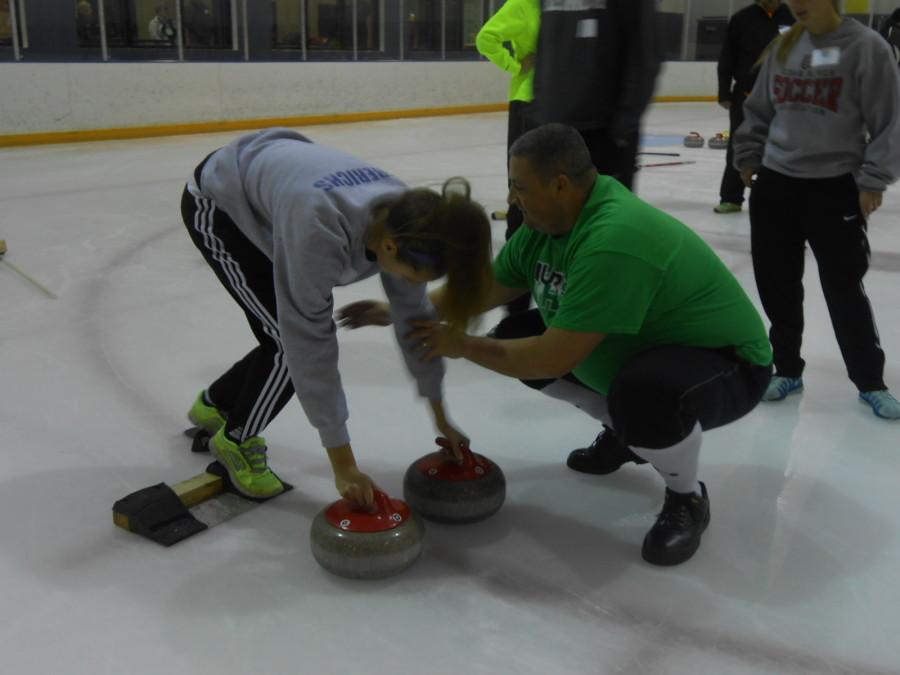 Cougars took to the ice to learn how to curl last night at the Cedar Rapids Ice Arena.

The presence of curling is still relatively new to the area.

The Cedar Rapids curling team formed back in 2013, when a few individuals who were interested in curling and found each other through Facebook and word of mouth.

Through learn-to-curl events, the club has slowly been growing in numbers.

Adrian Evans, a government teacher at Kennedy, has been curling with the team for two years, and taught students and individuals of all ages curling basics last night at the event.

“We go to curling tournaments mostly for fun,” Evans said, “Last year we were lucky because we hosted the Arena Nationals Group and it was an interesting tournament to watch. Our ladies team did really really well.”

“I had no clue I’d enjoy it as much as I did,” Ciabatti said, “It was a seriously awesome time. So much so that I’m seriously interested in starting a curling team at Kennedy. If more people gave it a chance, they’d feel the same way I do.”

Anna Frerichs, sr., was also went to the event, and was instructed by Evans on how to sweep and send stones across the ice. “It was a lot of fun, I wasn’t expecting it to be as physical as it was, but it was actually really difficult,” Frerichs said

The next learn to curl event for interested Kennedy students will be in January. Interested students should see Mr. Evans for more details. You can also find more information at www.cedarrapidscurling.com.