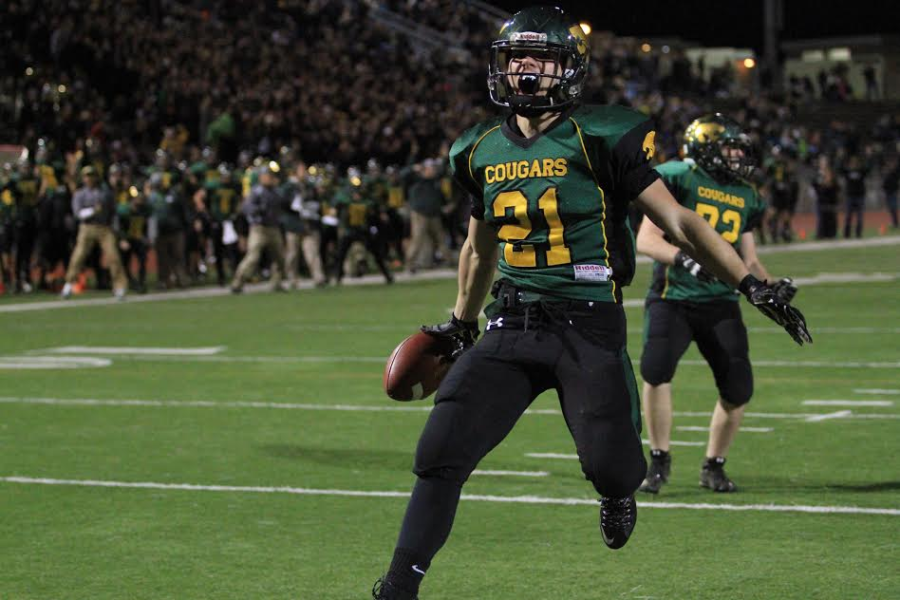 The UNI Dome student section was packed tightly with supporters Friday night all clad in green and gold. There was an enormous turnout to watch the Cougars take down the Bettendorf Bulldogs in the semi-finals of the class 4A playoffs and bring home yet another win.

The Cougars won the game 31-14, bringing their record to a never before accomplished 13-0 record. This win led to the the team advancing to the finals, which takes place tonight against Dowling at 7:06pm in the UNI Dome.

The game against Bettendorf was much anticipated as the team looked to seek vengeance against the team that beat them 31-7 last season.

Shaun Beyer,sr.,  started the game off with a touchdown, giving the Cougars a 7-0 lead which they held to the end of the first quarter.

The game was tied 7-7 in the third quarter when Dalles Jacobus, sr., allegedly was hit in the stomach by a Bettendorf player on a long run by Tyler Dralle,sr., after a block.

Jacobus was able to get his helmet off just in time before he threw up on the field.

Dralle scored two plays later on a 13-yard burst for a 13-7 lead and the Cougars finished strong from there.

“They ignited a fire under Dalles,” Coach Brian White said. “Watch the film and see what happened, but you don’t want to motivate him. He got everybody else motivated. Dalles was hot. That was as good as a penalty for me.”

No call was made against Bettendorf but despite being motivated on the field after the incident occurred, Jacobus doesn’t hold any resentment towards the other team.

“Emotions get to you and sometimes you do stuff that you regret,” Jacobus said, in reference to the player who allegedly hit him. “Thankfully it was nothing that was too big.”

Bettendorf came back with an 18-yard touchdown run to make it 17-14 with 10 seconds left in the third.

With 8:30 left in the game, Brandon Niemeier, sr.,  intercepted a pass and sprinted 55 yards for a touchdown, giving Kennedy a 24-14 lead.

“It felt very good. I was very happy to finally score a touchdown and couldn’t keep a smile off my face,” Bailey said.

Niemeier’s interception gave the Cougars some leeway. Later in the game, the ball was stripped and recovered by Kennedy at the Bettendorf 28-yard line.

“We are going to do what we always do to prepare for the next game, we will study film all week, learn how Dowling operates and runs its offense and defense and practice hard,” Bailey said. “All week we will mentally prepare and think through all of our assignments… winning the state championship would mean the world to me and all my teammates.”