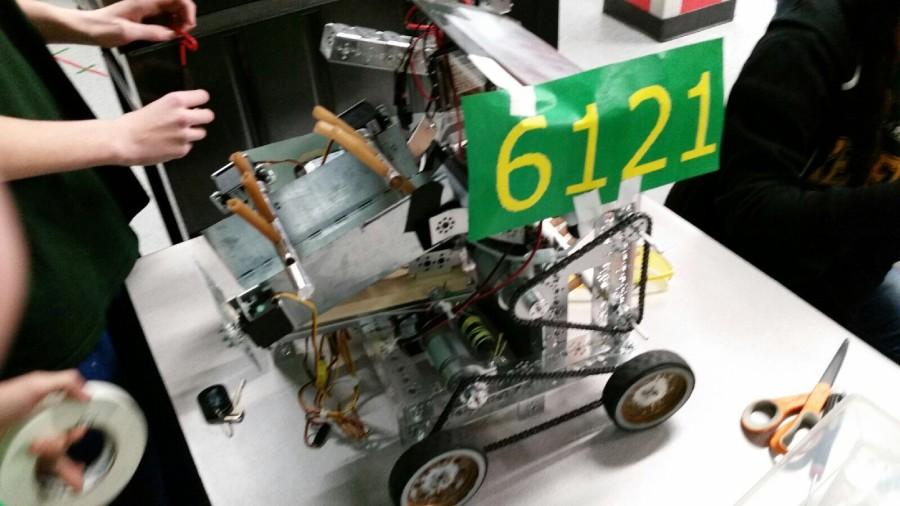 Robotics Club is one of many for students to check out. Kennedy's Robot above, is photographed by Daniel Lovig

“They said ‘Keep Calm and Join Robotics.’ Beginning his third year on the robotics team, junior Daniel Lovig recalls his reasoning for joining his Freshmen year. Although he did not know anybody else in the club at the time, the posters distributed throughout the school caught his eye.

“I wasn’t exactly sure what we would be doing in the club, but I wanted to find out,” Lovig said.

The Robotics Team, which is funded by Rockwell Collins, competes at meets designed by FTC. Competitors at these meets are given a set of tasks that their robots must fulfill within a specified amount of time. Besides time constraints, the team’s robots are also limited by size regulations.

This Friday, Kennedy’s Robotics Team will be competing at Linn-Mar High School, along with several other Cedar Rapids’ teams. The teams must build a robot with a collection system, and the students in Kennedy’s Robotics Club have been hard at work designing a robot that can complete the collection tasks.

“There are over 20 little three inch cubes, and around 25 three inch-diameter whiffle balls that are just spread out across the field, and (our robot) can just pick those up and deposit them into certain goals to score points. We don’t actually have it perfectly running yet, though,” Lovig said.

Although every member of the team actively takes part in the construction and coding of the robot, members can focus on one specific aspect if they choose to do so.

“Some of us code, and some of us build, but it crosses over some of the time. I prefer building the robot,” Lovig said.

Now an upperclassmen, Lovig has already learned a lot about robotics, and has had several interesting encounters since joining, allowing for some humorous stories.

“Most of them are injury related,” Lovig said, with a laugh. “My freshmen year, at state, I was unplugging one of our batteries to plug in another one because it had run out, and I accidently plugged the two batteries together. It sparked, and it burnt my finger, and I forgot the last five minutes of my life.”

Besides the unique experiences that Robotics club can provide students with, it can also help students to secure scholarships in the future.

“It definitely looks good on a college application,” Lovig said.

For more information on the meet tomorrow night, click the link listed below.