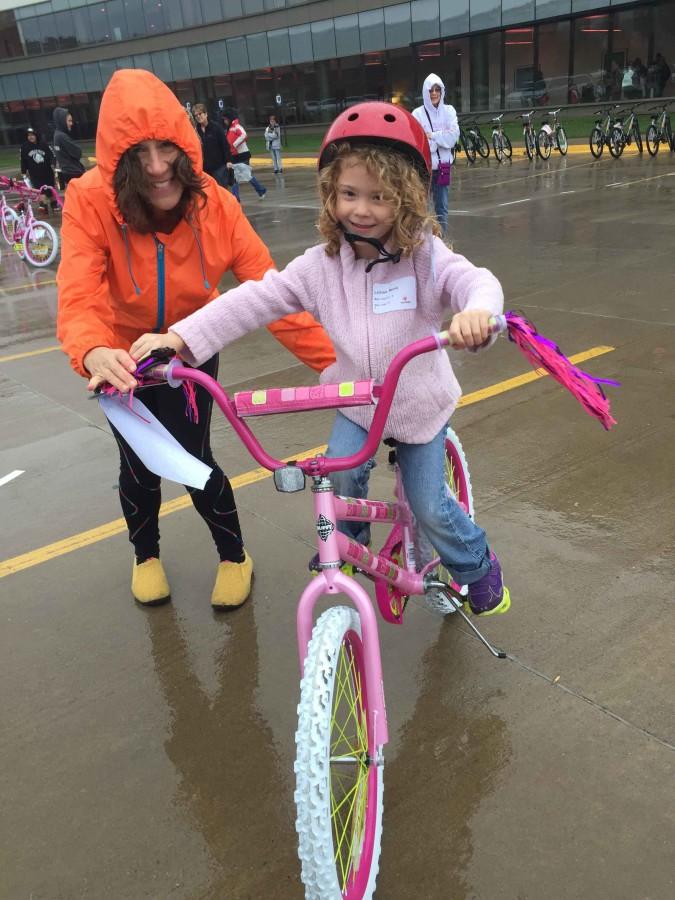 With all the different organizations that Kennedy has, it isn’t hard for students to find a way to get involved and give back to the community. However, finding an event that multiple student organizations are involved in together is rare.

But this Saturday, early in the morning while it misted outside, students from National Honor Society, student government, and KEY club came together to help distribute 113 bikes to children in the community.

“The program Bikes for Kids is a part of our mobility program that teaches kids to be mobile and to deal with obesity. It also focuses on responsibility and ownership through owning a bike,” Variety Star’s Eastern Iowa Executive Director Keeley Smith said.

Variety Star is a children’s charity that partnered with Transamerica for Bikes for Kids. All the bikes were bought with money donated from Transamerica.

“The smiles on the kids’ faces when we give them the bikes light up my day and it’s the coolest thing I do all year,” Smith said. “To watch a child get a bike warms my heart and makes me want to work for an organization like Variety.”

The children who received the bikes today were from the Henry Davidson Youth Center and Waypoint.

“Many of them had never had a bike before in their life,” HD Youth Center board member Robin Rieckhoff said. “The rain was a little tough but we managed to get everything figured out and the event ended up going great.”

In order to pull the event off, many volunteers were needed to make sure all the children were able to get their bikes okay. Among these volunteers were Kennedy students from a variety of organizations.

“I am really grateful that I got to come because it was a really fun experience to see all these kids and to help them get a bike,” Student government member Grace Walker said. “I think that having a bike as a kid is a really cool thing. I think we forget how cool owning a bike is and so we take advantage of little things like that.”

Volunteers at the event helped unload the bikes from a semi-truck, sort them into sections for the children, and then actually gave the bikes to the children.

“Today was just a giant act of giving,” NHS officer Aren Buresh said. “I really enjoyed seeing the kids getting excited about having a bike and watching them ride them through through the parking lot with big smiles and pure joy on their faces.”

One Kennedy volunteer had a more personal connection with some of the children who were receiving bikes. KEY club officer Sydney Rieckhoff knew many of them personally because she had volunteered at the HD Youth Center in the summertime.

“I hope that they see that there are people in the community that want to help them,” Rieckhoff said. “There is a large support group of people who want to see them do well and be active and just want them to have a good childhood overall.”

The Bikes for Kids event on Saturday was the first of its kind in Cedar Rapids. But with all the support it got from volunteers and the positive feedback it received from the children and their families, there is hope to do another event like it again in the future.

“I’m really happy we had so many organizations from Kennedy out to volunteer at it,” Rieckhoff said. “It’s really great that we could all work together on a project for once and really do good in the community.”