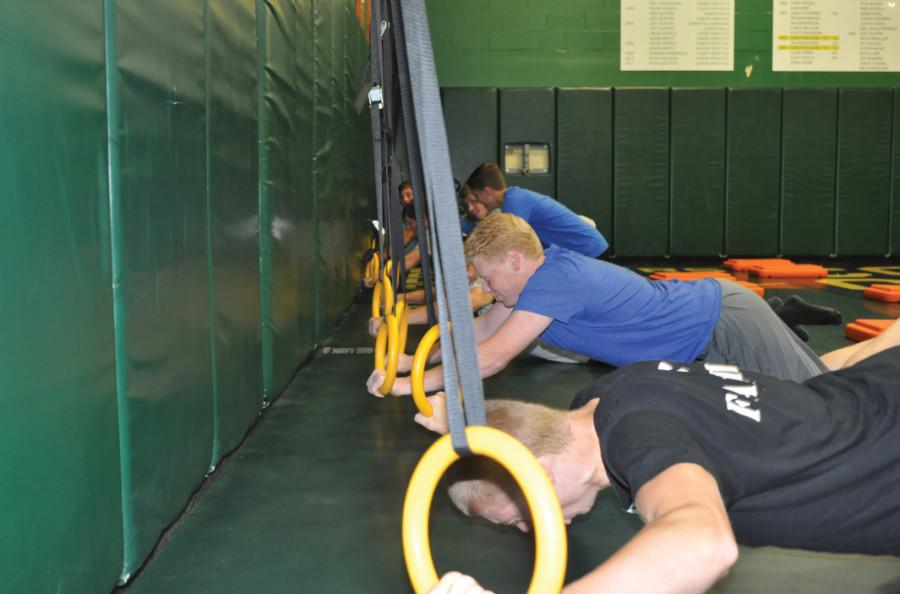 For eight hours a day, the Kennedy weight room and wrestling room are packed.

There are currently eight periods with 90 students in each period.

The performance PE class, started in 2012, is an alternative to the standard gym class. Even from the beginning the demand to get into the class was high.

“When we first started it was me basically in the mornings, so it was two early birds through 4th hour and Coach Pakk had it in 5th and 6th, but it was capped at 45,” Coach Tim Lewis said.

Lewis is the head strength coach at Kennedy High School and has decades of experience. He is also in charge of the Performance PE class.

“There were a lot of kids that really needed to be in the class but they couldn’t get in,” Lewis said.

What originally started as a way for athletes to lift during the day has grown to immense sizes.

“I was trying to think of ways how can I make this work because people weren’t getting in,” Lewis said, “This year we were able to, and thankfully, the administration allowed us to do this, have both coach Pakk and I go on.”

Many changes have been made to adjust to the massive demand for this class. For example, in past years Lewis taught the class from 6 a.m. to 4th hour and Pakkebier taught the class for 5th and 6th hour. This year both coaches run the class from 1st hour to 6th hour, and Lewis still runs the 6 a.m. and 6:45 a.m. classes.

“We’re both on and we can offer it to more kids all day long, where before it was limited to 45, we can now offer it to 90,” Coach Curt Pakkebier said. Pakkebier is the Kennedy men’s track coach and runs the Performance PE class with Lewis.

Lucas Berry is a senior football player who has been in the class all four years.

“I would say it’s gotten a lot bigger, people have understood that it really benefits you and they hear about the class,” Berry said.

“I think it has grown in popularity because people are seeing the benefits of it,” Pakkebier said.

The class is open to everyone, not just athletes.

“This class is for everyone. Initially there was a misconception that it was just for football players, but everyone can take it,” Lewis said.

There is a substantial time commitment for the lifting coaches.

“I’m here 11 to 12 hours a day, which most of it is spent working on something related to strength training,” Lewis said.

The coaches believe that the students putting in lots of hard work is paying off, as the Kennedy fall athletic teams are doing very well this season.

“I would like to say that the success we’ve had this year, with this senior class, I’d like to think that the performance PE has had something to do with it,” Lewis said.

“Having the ability to lift and work out five days a week, essentially year round, it’s gotta help,” Lewis said.

“It’s really helped out in our sports,” Berry said. Football is undefeated through six games, volleyball is conference champion, and women’s swimming has only lost one dual meet.

With continued growth in the class, Lewis is optimistic about the future of Kennedy athletics.

“[The senior] class is the most committed class that I’ve ever had just to working out,” Lewis said. “You got a lot of guys in [the senior] class that just live in the weight room…they never miss and I think that’s a huge message to be sent to the lower levels.