Empowering across the world 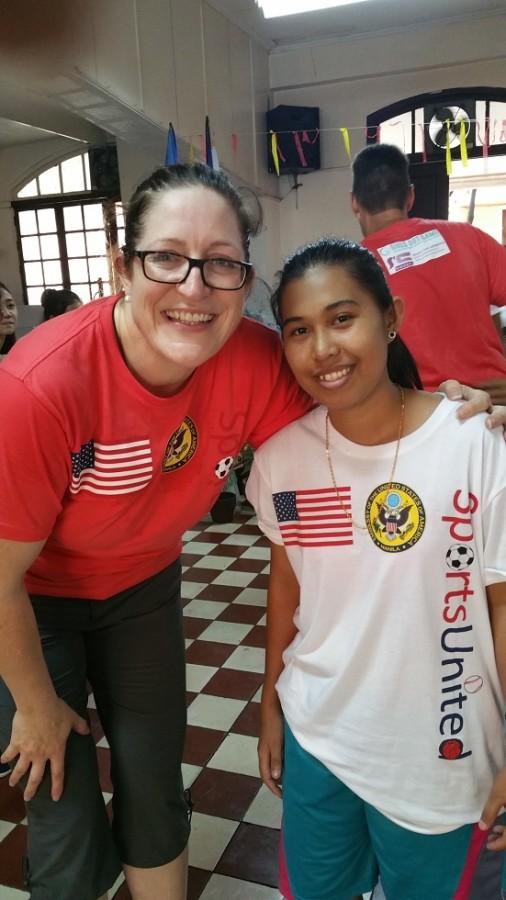 Surprise one. A phone call.

Head volleyball coach Michelle Goodall was first contacted in mid-August by Sports United an organization within the United States Embassy. Goodall was recommended by her mentor John Kessel from USA Volleyball to travel to the Philippines to offer clinics to athletes and coaches. The trip’s purpose was to promote empowerment through the sport of volleyball.

“When I first read the proposal I was very intrigued,” Goodall said.  “I love coaching, and I am passionate about people in general so sharing my passion with others around the world was something I found really appealing.”

Goodall traveled with one other Sport Envoy, a coach from Arizona. The two traveled to Manila and to Cebu City and worked together running coaching and volleyball clinics to around 750 youth and young adult physical education coaches. One clinic took place at Marillac Hills, a home for females rescued from the sex trafficking industry. Another was held at the University of San Carlos in Cebu. Participants were from conflicted regions within the Philippines. Other clinics were held in the impoverished area of Laguna and another at Asilo de San Vicente de Paul, an orphanage in Manila.

Goodall said the children that she worked with are almost all facing disadvantages. Some were low income, others were orphans or were rescued from sexual abuse situations, and some were in trouble with the law. She was amazed when she saw the children’s faces light up when they mastered a skill in one of her volleyball clinics.

Surprise two. She had no idea the things she saw would have an everlasting impact.

“These kids have nothing.  Their gyms are cement pavilions.  Their net was often times a simple rope.  It was 100 degrees.  They ate rice every meal.  They wore sandals or their donated Tom’s shoes…and they didn’t ever complain,” she said. “They were so grateful for this attention and this training opportunity that they would send us home each night with hugs and high fives and they begged us to visit again.  It was heart-wrenching and heart-warming.  I will never forget them.”

Months ago Goodall hadn’t even heard of the Sports Envoy program. Something inside of Goodall told her that she should get a passport incase the chance to travel was ever given to her. She had nothing planned, but then the opportunity came and she was ready. “It was a God thing I’m sure,” Goodall said. She hadn’t imagined going overseas to coach, but she felt as if she was being led in that direction.

At first there were some questions for Goodall, like the date of her trip, but in the end when it was decided, it worked for her and she received the blessing from her team, bosses and family she took the chance and went on the trip of a life time.

“I was raised in a home where we often noted our position of gratefulness, but this experience has made an impact on me and I have learned to be grateful in everything.  I forget sometimes how great we have it….and I just feel humbled,” Goodall said. “On the way to the gyms we would pass the streets of these kids’ homes and you would often see full families sleeping in the street gutters and children just playing with nothing, but a homemade ball and they are just happy.”

“Before I left they (the team) knew what I was off to do, and they supported it fully,” Goodall said. “They even sent me handmade cards where they wrote their own words of empowerment and encouragement.”

When she stepped off the plane her players greeted her with a 12-foot sign that said, “Welcome Home.”

“We’ve got a lot of leadership, they all get along, I’m going miss the instant chemistry that this particular group provides whether they’re a role player or a superstar on the team. They all get along and that really makes that part of coaching interesting.’

Goodall’s team has seen nothing but wins this season. The Cougars are undefeated in their conference with seven victories. Their win streak led the team to being the conference champions for the first time in Kennedy history.