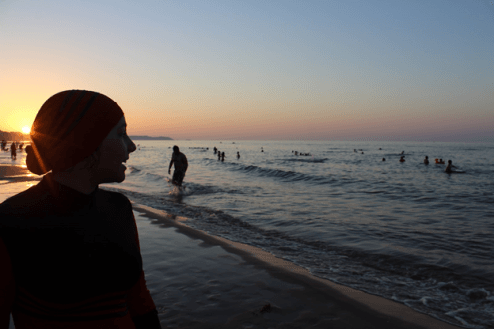 Do you have an opinion you’d like to share? Send your editorial to [email protected], or talk to a member of the Torch staff about having your work published on our website or in our issue.

If you would like to submit an opinion piece to the Torch, email us at [email protected], or talk to a staff member.

This summer, was not spent like many of my previous small town, state fair Iowan summers. This summer, I instead boarded a flight to a far off, distant country vaguely known by many of my fellow Iowans. That country was Algeria (no, not Albania or Nigeria;Algeria), and I went to visit family, practice my native Arabic, and most importantly, reconnect with my culture.

Consequently, reconnecting with my culture proved to be the hardest feat to accomplish.

On the flight, I was giddy with excitement. For a long time Algeria had just been a distant, far off memory, almost like a dream. I was excited to experience the culture, go on adventures often, and take a lot of photos.

The moment I stepped off the flight, however, I was hit with an entirely different climate that I wasn’t used to in Iowa. The air was hot and dry, the landscape was rugged, and there were cacti everywhere. It wasn’t only the vastly differing Algerian climate that I would need to get used to.

They then began to move on to discussing women who had cheated on their husbands. Obviously cheating is an awful thing to do, regardless of whether that person was a woman or a man. What I noticed though, was that they had only talked about women cheating. Surely if they knew this many women cheating they obviously knew a few men who were doing the same. Then, at the end of the discussion, I figured why they didn’t bother to talk about it.

My aunt said something along the lines of “you know, I can understand why a man would do something like this, because it’s in his nature, but for a woman? just sickening…” At that point I was so angry I had to say something. I looked at my mom and I said “are you kidding me? Are you hearing what she’s saying?” My mom, while also slightly perplexed by the statement my aunt said, decided to brush it off and tell me “sweetie, you’ll understand when you’re older.”

I didn’t want to start a fight because that’s not what I was in Algeria for, so I decided to go to the room I was staying in for the summer and cool off steam by ranting about it to my fellow Lebanese friend back home, who I figured had similar experiences. We then began to discuss sexism in our similar societies back home and how it can incredibly detrimental to us as women.

To me it seemed women had to fit into tight and strict expectations while men had the room to choose what they wanted to do in life and had the privilege of making mistakes along the way. A woman’s expectations included (but were not limited to) being accompanied by a male during the night time, making sure to wear things that wouldn’t incite men before going out, going to and finishing college, staying at home if it didn’t involve school or work, being married and having kids before 30, and respecting and asking permission from parents and her husband before going out. Women always had to ask for permission. Whether it was finishing college, asking to work instead of staying at home- since many newlywed women decide to give up their jobs and stop going to college once they are married- permission is always the priority.

One afternoon I was helping another one of my aunts in the kitchen while she was preparing a Ramadan feast. After a while we got on the topic of her college experience and school. She told me that while in school she absolutely loved computer science and wanted to pursue it as a career. I asked her why she didn’t and what stopped her. She then became a little more quiet and embarrassed and responded with “I suppose things just happened.”

Being the person I was, pressed on. “What kind of things?”

“You know, getting married and having kids.”

“Why should that stop you? You can be married and work.”

“Yes but your uncle didn’t think it was best for me.”

With that answer, I was upset and so ashamed that my uncle- as in my mother’s brother- would make her do such a thing.

“Why didn’t he think it was best for you?”

“He didn’t like the idea of me working with a lot of people and being out everyday.”

I responded with a simple “oh” and the conversation died down. It was a conversation that upset me, and would continue to upset me incredibly.

After talking about it with my mother, she told me that as depressing as it was, my uncle was letting her go to culinary school where they had plans of opening a bakery. While I was happy for her because she had always enjoyed baking, it upset me that she was only able to pursue it because she had my uncle’s permission, and that she wouldn’t ever be able to pursue her true passion, technology & computer science, because it was simply not permissible by her family and her husband.

Another priority in the everyday life of an Algerian woman is not to shame her family: it’s critical. It doesn’t matter if it’s against what she wants out of her life, or what she feels is best for herself, it’s the shame that it might bring to her family if it happens that’s most important. Whether it’s if she doesn’t want to marry or have kids, if she wants to live by herself, if she wants to wear shorts and a tank top, have a romantic life before marriage, or have a job not considered appropriate for women.

One day I was sitting with one of my uncles on his balcony that overlooked the Mediterranean. With the sound of waves crashing in the background, he began to discuss with me that a man should always be the head of the house to ensure a stable family. Needless to say, I disagreed.

From there stemmed a debate, that soon included my entire family becoming involved. At the end of the argument, my uncle declared the that the west had poisoned my morals and beliefs. But the thing was, I didn’t form these opinions and outlooks because someone from the west taught me, they formed once I had access to the outlooks and experiences of women from all over the world, whether through intersectional literature, online magazines,documentaries, and social media, specifically various blogs on Tumblr.

When I got back home and told my Iowan friends about the experiences I made and the situations I witnessed over coffee, they would respond with something along the lines of “that’s unfortunate, I’m glad we don’t deal with that here.” The thing is, we did at one point, and we came a very long way to get here. Many people, mostly those who disagree with feminism, like to point out that American women have it lucky, and that western feminists should have no place to complain when third-world countries (like Algeria) deal with sexism that’s ten times worse. However, what they don’t realize is that it was feminists, those seeking a more just future for women, were the ones who changed Iowa and America as a whole for the better. And even now, in Algeria, it will be those feminists who will challenge and reform preconceived notions and political beliefs to make Algeria become a more just place.