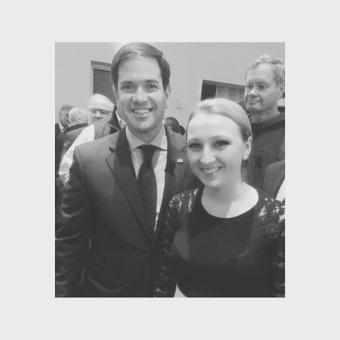 While attending some of these talks, interviews, and meet and greets, it has come to my attention that there are very few students participating in the events. With the fate of our nation in such a precarious position, it is extremely important that every eligible citizen participate and maintain an awareness of all of their potential leaders.

However when I walked into the Iowa Accelerator Center on Wednesday, I immediately realized that I was going to stand out in the small crowd that was gathering, as no other students had arrived. It was undeniable that I looked out of place amongst the reporters and elderly couples that were accumulating in the Center’s main room.

It was also clear that I was the only one under the age of 60. It wasn’t until the event was about to start when two teenagers finally walked in. Even then, the ratio was overwhelming in favor of the elderly population.

In fact, I only saw three Kennedy students at all of the events combined. In a school with over 1800 students, this means that not even one percent of the student body is actively taking advantage of the opportunities available to them.

The most interesting thing to me was that a year ago, I wouldn’t have wanted to go to a political talk either. Politics are not something that most teens find exciting or even slightly worthwhile, yet in reality, there is much more to the world of politics than meets the eye.

Many well-known people attend these events, and although they may not be popstars or talk show hosts, they have influenced our country in numerous important ways.

For example, former member of the House of Representatives and the Senate, Democrat Tim Penny made an appearance at John Kasich’s speaking event. Iowa State Representative Mary Ann Hanusa, who is endorsing Kasich, was also present at the event. While the names Hanusa and Penny may not ring any bells, meeting both of these figures was an honor and was an incredibly unique experience.

The candidates themselves are also famous, which contributes to the sense that it is worthwhile to attend political events. Whether you like the candidate or not, a picture with someone who is going to be our future president is something that many people would travel miles to get, and by attending these free events you can get one at no charge.

The issues that are discussed at these events are also interesting and extremely relevant to the problems we are facing currently and will face in the near future.

Intense conversations on security threats from North Korea, China, and Russia were had at Rubio’s National Security Forum and his Town Hall. The conversation also drifted onto that topic at Kasich’s Town Hall.

Issues that directly affect students were also frequently discussed when both Republican candidates analyzed plans for student loans and education beyond high school.  At the end of the events, attendees were allowed to go up and briefly speak with the candidates about specific issues that concerned them, and were also able to get a quick handshake, autograph, or a picture.

Essentially, the atmosphere at these events is extremely exhilarating and it is impossible to leave without having learned about conflicts of the nation that had previously not even occurred to you.

While your individual vote may not seem like it will have an impact on the results of the election, it is still important for everyone to make informed decisions about the future. Visits from candidates provide once-in-a-lifetime opportunities when it comes to gaining the necessary information in order to do so.