Back in the black box

Alosha Robinson, Kennedy class of 2013, returns to Kennedy as the writer of the play "Nice People." 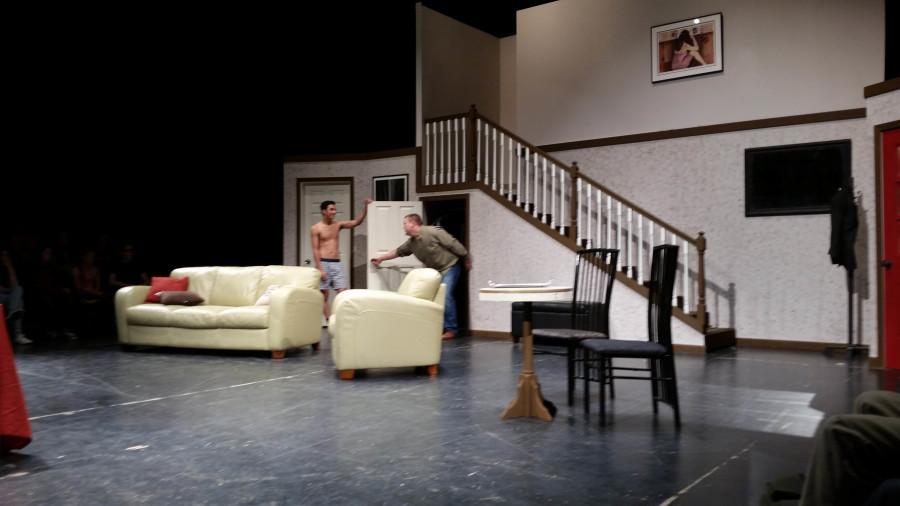 Kennedy’s drama department took on a unique challenge this year as they brought an alum’s vision to life on stage: Alosha Robinson’s “Nice People.” Not only that, but this was the first full production of the play, although there was a stage reading last year at the University of Iowa.

Robinson graduated from Kennedy in 2013. While attending the school, he was actively involved in the drama program, starring in such plays as “Rumors.”

“I’ve always loved farces, I’ve always loved comedy,” Robinson said. “We did ‘Rumors’ here my senior year, and I ended up reading a lot of farces because I’m really into that. Kind of the premise of a farce is entrances and exits, everybody’s hiding, everybody’s having sex with everybody, everybody’s lying to everybody, and the initial idea for the play was I wanted to kind of take a play that hyper-inflated the traits of a farce. I just wanted to play with the things that I love about a farce.”

Most of the characters in the play acted the way characters typically act in a farce: shallow, selfish, and one-dimensional. But the character of Ron Darrow broke that mold.

“What I thought is, ‘What if there was a character who kind of did not feel that way?'” Robinson said, “‘How would that person operate in a farcical universe?'”

Once Robinson got the idea in his head to write this play, he put in a lot of time and effort to transform it into the finished product that the cast performed.

“The first draft of my first act was probably done in four months,” Robinson said. “What was hard about writing the play was realizing that I had no idea how everything was going to go. I’d set all these pieces; everything was a disaster at the end of act one and I didn’t know where things were going to go moving forward. So then I didn’t touch it for almost a year, because I just had no idea how to end it. Then I went up and I visited my parents in Colorado and I went for a hike through the mountains, and I’m like ‘I gotta figure this out,’ and I kind of did.”

Even after coming to that conclusion, Robinson still had a lot more work ahead of him.

“I’m a very neurotic writer,” Robinson said. “I’d say the play has in a sense been through over 100 drafts, because I’d be in my room and I’d read the whole script through, 90 pages, and I’d probably change two words every time…ultimately I probably wasn’t making anything better, but I kept working on it.”

After having finished the script and giving it over to Kennedy’s drama department to turn into a full-fledged play, Robinson had the opportunity to sit in the audience and watch his vision unfold.

“I’m just exceptionally proud of what these guys have done,” Robinson said. “I think the cool thing about this, seeing it come to life is that, there was a stage reading at the University of Iowa, and that director took a lot of things…in a different direction than they were tonight, and I don’t think there is any necessarily right way to do it, you’ve just got to invest yourself entirely and these kids are insanely talented, I can’t imagine such a talented bunch of kids. I couldn’t be more happy and thrilled with what I saw tonight, I’m so proud of them. I can’t imagine it any other way now.”

Due to the popularity of this show, it was sold out all three nights, and in fact people were being turned away. Because of this, Nick Hayes, the director, and Steve Tolly, the technical director, came out after the bows and made a surprise announcement: the play will be shown at a previously unscheduled fourth time, this coming Thursday at 7 p.m.

One unique aspect of this experience was that since Robinson is a fairly recent graduate, he has worked with Hayes, as well as many of the cast members. Robinson felt that this was an advantage in bringing the production together.

“I’ve had productions of smaller theater pieces go up, but I always direct my own writing, because I have a very particular vision,” Robinson said. “Last year this play went up at Iowa, but I worked very closely with the director, because he’s a friend of mine, and I’d say I essentially co-directed it. This was the first time I’ve taken a piece of my writing and just completely handed it over to someone else, and it was very scary, but Mr. Hayes told me as he was talking to me, ‘I feel like I have a better idea how to direct this just by having worked with you and knowing how you talk and having seen you improv and having seen your sense of humor.’ So yeah, I think it was a major benefit. I was really close with a lot of these kids already, and I only feel closer to them now.”

According to Robinson, he sees a lot of himself in two of the characters, Ron Darrow and Danny Harkin.

“I honestly consider Danny and Ron kind of my ego and id, so I think there are a lot of parts of both characters that I relate deeply to,” Robinson said. “Danny has kind of a deep desire to be acknowledged and to be loved, and this sense of a strong vocabulary that may not be completely informed, and then Ron is being baffled at the fact that people could be mean to each other, and also wondering, is the high horse you put yourself on when you adopt that humanist lens, does that make you better than those people, or does that make you worse?”

Hayes, the director, was excited to be able to put on a play written by a student that he knew and had directed in the past.

“His senior year he was in a farcical comedy on this very stage, and shortly thereafter started writing this play,” Hayes said, “I can’t help but feel like that influenced him in some way, and that feels really good to support him and continue to see how that’s grown. I got to see the first draft of that, and it didn’t really have an ending, it was a bunch of loosely tied together jokes, and now to see it revised into a full story is pretty fantastic.”