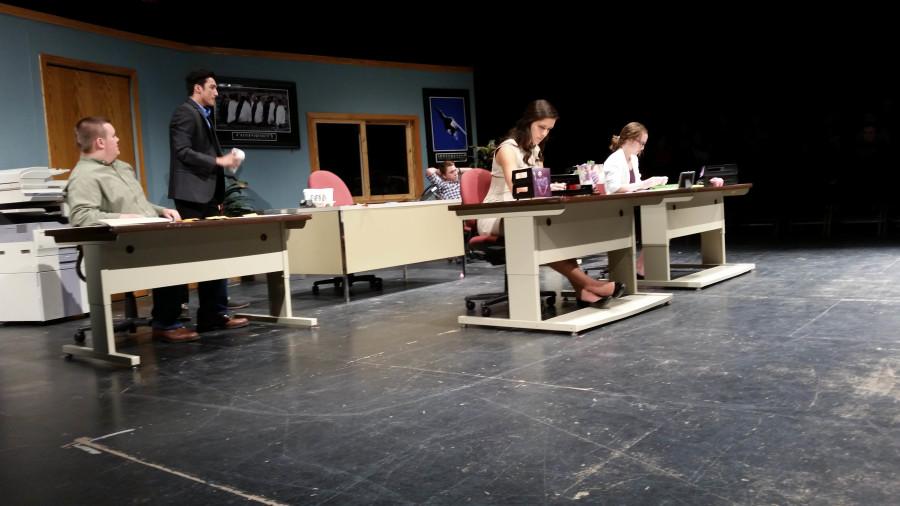 The cast of “Nice People” put on the first act of their upcoming play for some of the students of Kennedy today in the black box.

“[The play] is just so much fun to put on, because people laugh, and I like making people happy,” Urbi said.

“[I’m looking forward to] bringing happiness to the people and making them laugh,” Kiesey said.

Celia Wade, Danny Harkin’s “other woman” (one of them, anyway) is played by Annabelle Gust, sr.

“My character is super fun to play, and it’s something unlike I’ve ever done before,” Gust said.

Mikah Lunsford, sr., is a devoted office worker with Danny Harkin as her boss and apparent love interest, although these feelings are not reciprocated by him.

“Because the cast is so small on this show, it’s a lot of fun because we get to get so close,” Lunsford said. “I really like working with these really great people.”

Another of Urbi’s and Lunsford’s co-workers is Danny Scrood (Cameron Currie, sr.), the office pervert.

“I’m definitely looking forward to the audience’s reaction,” Currie said. “We definitely have a feel for where we think the laughs are, but it will be interesting to see where the audience finds the funny and where they enjoy the show…I have high hopes for [the show] and I know everyone else does too.”

“Nice People” opens Thursday, Oct. 1 at 7 p.m., and will also play Friday and Saturday at the same time. The play is free with an activity pass, otherwise the price of admission is $5.

Also worth noting is that the play was written by Alosha Robinson, a Kennedy graduate of 2013 who was actively involved in the drama department during his time here. This show will be the first full performance of the play outside of its workshop at the University of Iowa.