Making a splash for Ash 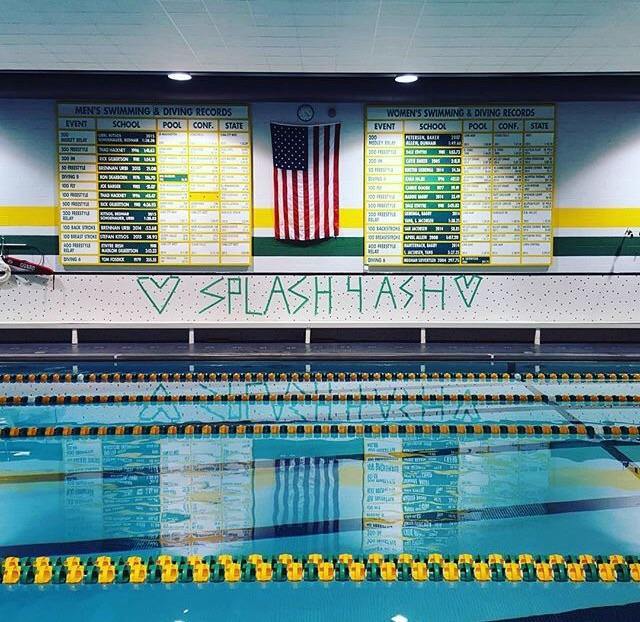 The Kennedy Women’s swim team made quite the splash down at the pool last night in a meet against Washington High School. Not only did the team dominate the meet with a final score of 133 to 53 but the swimmers all had someone in mind that they were swimming for.

Last night’s meet was dubbed ‘Splash for Ash’ to honor teammate Jayden Bisson’s sister, Ashley Bisson, who was diagnosed with stage four Hodgkin lymphoma. Ashley was diagnosed back in April and has since been undergoing treatment for her cancer.

“It originated in her lymph nodes and then spread to her lung and spleen from there,” Jayden said. “A couple weeks ago she finished up radiation and had a PET scan that came back relatively clear. We are hoping that the chemo and radiation got rid of it. In two more weeks however she has another PET scan and we will hopefully find out that it’s 100 percent clear.”

At the meet, swimmers from both teams wore special caps to honor Ashley and money was donated to help out both Ashley and her family.

“They raised over $900 and we had several 100 dollar donations made to our family,” Jayden said. “It meant a lot to know that there was that many people supporting us. Like not only the team of like 50 girls but a lot of people came out to the swim meet. It was more than we have ever had at swim meets were at that meet. It meant a lot to Ashley to see how many people were supporting her.”

The meet was not only a success for support of the Bisson family but for the swim team over all.

“Our team chemistry is really good so I definitely think that translates into our success in the pool,” Team Captain Kirsten Siebenga said. “We ended up winning over Wash by quite a bit. We won just about every single event and everyone was just really on point for where they should be in the season.”

Great things are expected to come from the already strong women’s swim team who have started their season out with dominating all of the meets so far. The swimmers plan to continue this streak at their next meet next Tuesday in Dubuque.

“It was a really special night to be able to swim for someone who’s fought so hard for something, and then to be able to win the meet just added to the really positive atmosphere,” Siebenga said.