Cougar Nation gets fired up for first football game 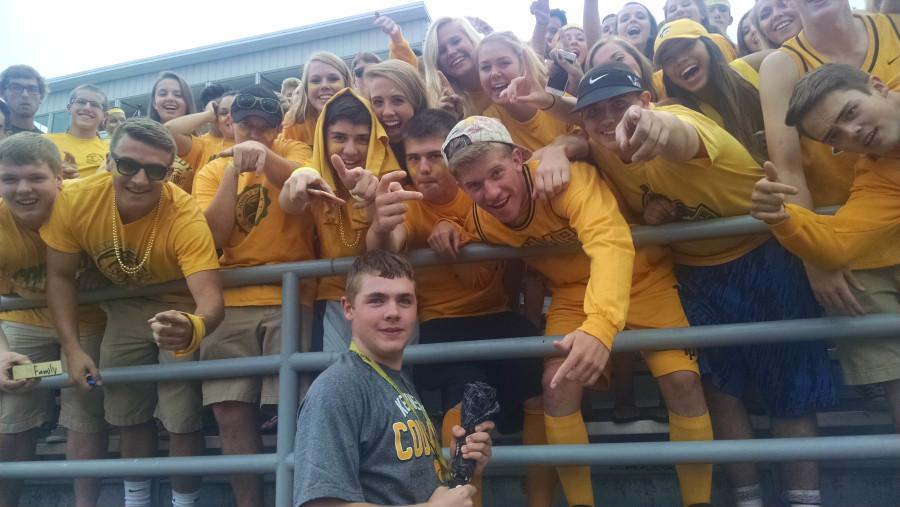 With the start of the new school year comes the start of the football season, and Kennedy high school is excited. The season opener is against Iowa City West and it has a lot of people fired up, especially the Cougar Nation.

The Kennedy Cougars will face the Iowa City West Trojans at Kingston Stadium on Thursday at 7:15. The Cougar Nation wants to remind everyone that the game is a gold-out and to “make it as fun as possible.”

The Cougar Nation is the name of Kennedy’s student section and an accompanying Twitter account. Both are run by three seniors: Jacob Henry, Dan Baxter and Parker Kalb.

These leaders intend to be far from alone in their cheering duties this year.

“We encourage every senior to help out and lead this year’s student section with us,” Henry said.

This is a change from previous years where one student was the leader. This year the Cougar Nation will be led by the entire senior class.

“We expect the senior class to be a huge part of this year’s student section,” Henry said.

Henry feels that the senior class has something special to offer that will make the Cougar Nation great.

“This year’s senior class has the ability to have a lot of spirit,” Henry said.

For some, like Henry, it is clear to see that the class of 2016 has more spirit than the usual class.

“Everyone knows we swept the spirit stick competition as juniors. We just need to transfer that over to the football, basketball, and volleyball games and it will be a great year,” Henry said.

With so much spirit and so much excitement things sometimes get heated. On Monday there was an exchange between the Cougar Nation Twitter account and the Iowa City West Twitter account. Henry says not to think much of it, and that public exchanges like that can be good for school spirit.

This year is shaping up to be an exciting one for the Cougar Nation, and the leaders want to make sure it’s a good one.

“Let’s try to make this year the best one yet,” Henry said.