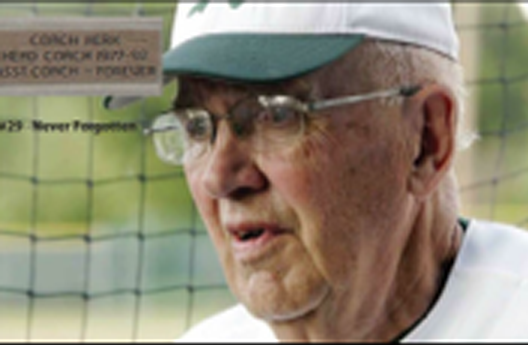 The name Herkelman cannot be spoken at Kennedy without heads being turned or stories being shared about how Coach Herkelman has impacted someone’s life during his time with them at Kennedy; whether it was within the walls of the school or out on the baseball diamond.

The legendary former Kennedy head baseball coach and teacher Bill Herkelman, or Herk, as he is better known, passed away Friday morning at the University of Iowa Hospitals and Clinics after complications due to a stroke he had on Thursday. Herkelman was 77.

Shortly after the news of Herkelman’s passing, Parker Lloyd, sr., tweeted a message that many would agree speaks well to Herkelman’s character.

Herkelman’s career at Kennedy began in 1967 when he joined the staff and began teaching mathematics.

Herkelman retired from teaching in 2012 after a roughly 52 year long career of teaching in classrooms, but his career coaching baseball continued up until his passing on Friday.

Alumni student of the 2012 class, Marie Treangen, says she remembers Herkelman as a teacher who was never willing to give up on a student, so long as they didn’t give up on him.

“I have always been pretty terrible at math and it was always super frustrating for me,” Treangen said. “Even when Mr. Herkelman wasn’t my teacher, I was still in his classroom after school most days. He was always so patient and willing to help.”

Treangen wasn’t the only one in her family that benefited from having Herkelman as a teacher.

“He taught my mom, my aunt, my sister and me,” Treangen said. “We are all terrible at math so God bless him for teaching all four of us.”

In 1968, Herkelman became the assistant baseball coach for Kennedy, a duty which he fulfilled diligently until 1976, when he was appointed to the role of head baseball coach.

During his 36 year coaching career at Kennedy, Herkelman was able to rack up a winning record of 318-224 and earned an induction into the Iowa High School Baseball Coaches Association Hall of Fame.

Last year on June 2, 2014, the Kennedy  baseball field was named Herkelman Field as a tribute to honor the long-time Kennedy coach and his dedication to baseball, education, and his students on and off the field.

After a brief hiatus from coaching, Herkelman re-joined the Kennedy baseball coaching staff in 2005 as an assistant coach to current Kennedy head coach Bret Hoyer.

“He is the godfather of Kennedy baseball. Every single team will try to live up to his standards that he set for this program many many years ago,” Hoyer said. “We hope to represent his legacy well every year.”

Even though Herkelman will no longer be with his players in body, he will always be with them in spirit and will forever live on through the memories they all have of him.

“I remember my first day of practice as a junior, and I hadn’t officially met him yet. It only took about five minutes before he started talking to me like we were old friends,” Althoff said. “His friendship was very special to me the two years I was on varsity and he is someone I will look to model my life after.”

Before Herkelman passed away, he was able to see his beloved Kennedy Cougars make it into the state tournament after defeating the Cedar Falls Tigers 18-1 in the substate final.

“I think that if there’s anything good that can come out of this, it’s that it really showed how close our team is,” Lloyd said. “I know that when we take the field in Des Moines and Herk sees us play together as a family for all seven innings, he’ll be smiling down at us.”

Despite the players still grieving over the loss of their beloved coach, they still plan to give it their all at state, all the while remembering who they are playing for.

The Kennedy baseball field has since been transformed into a memorial in Herkelman’s honor. Baseballs with heartfelt messages written on them, with statements such as “the ump just called him safe at home,” line the edge of the back screen net, along with flowers and pictures of players with the coach.

A final thing that the Kennedy baseball team did to honor Herkleman was the lighting of the scoreboard with the number 29, which was his signature number.

Kennedy is set to play Davenport North in the opening round of the Class 4A baseball tournament on Wednesday at 5pm at Principal Park in Des Moines.