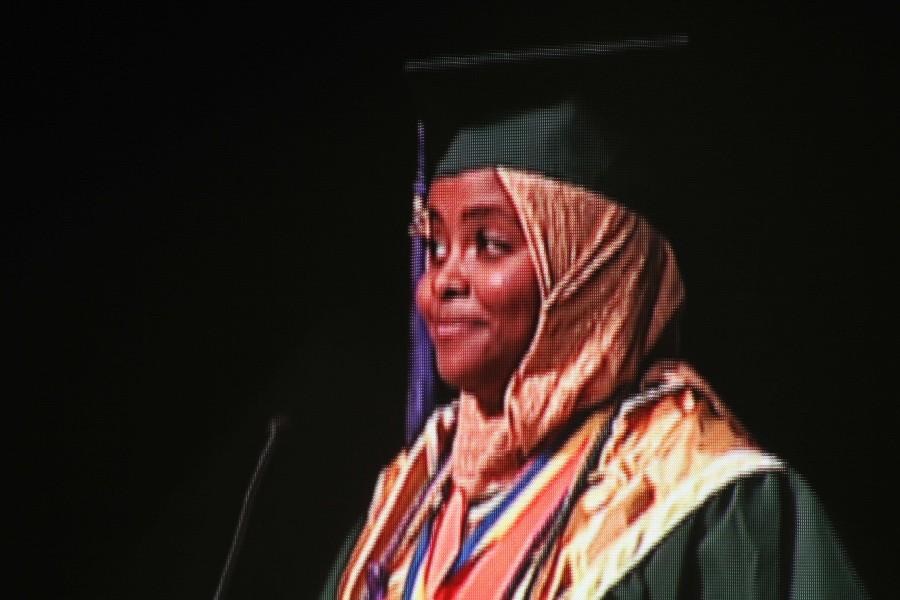 Families gathered in the stands to see their young adults walk across the stage in Kennedy’s green graduation gowns and caps. At the opening of the ceremony, teachers led the students into the center for a processional, with the students’ clinking of medals audible as they walked toward stage and took their seats.

After performances by the Kennedy Orchestra, choir, Pledge of Allegiance, and welcoming to the event,  senior class president Fatima Elsheikh began several of the student speeches. Elsheikh’s  speech was unique and moving — even adding in a rap she created.

Her speech’s main focus was to encourage seniors to go out and change the world because of the opportunity and education  received at Kennedy. “Anyone can make a change in the world for the better,” she said. She also made references to classmate Drew Wall, who died his sophomore year from cancer. Throughout the ceremony, Wall was remembered by speakers, and many seniors wore purple tassels on their caps in his memory. Wall would have graduated with this class.

Principal Jason Kline, in his speech to the graduates, also referenced the lasting impact of science teacher Kathy Kittredge. She battled cancer and died in November 2014. Kline asked the seniors to thank their teachers and parents. He encouraged seniors to go into the world realizing they were “one voice” of many, and be willing to listen, compromise, and contribute.

Valedictorian Tianyi Han was next to speak. Due to an ill family member, Han could not attend the graduation ceremony, and so pre-recorded her speech to be played for students on the big screens in the Double Tree Center. Han thanked her teachers and family, and said they helped her become a better person.

Dr. David Benson, who will retire this month as superintendent of the Cedar Rapids Community Schools, thanked the audience and students for the years he served. Benson encouraged students to take advantage of their education and to go out in the world to make a difference.