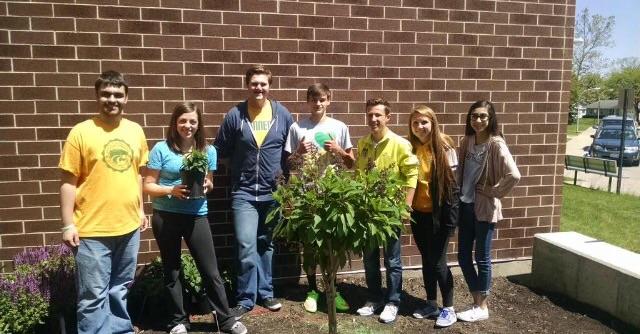 Over the last few years, the Kennedy community has been greatly affected by cancer, Drew Wall, a student, died from cancer in 2012, Kathy Kittredge, a science teacher passed in 2014, and Michelle Frye, language arts teacher suffered through treatment and fortunately is still with us today.

Along with those three members of our community, students and staff have dealt with other cases of cancer in their family and friends.

“They’ve truly gone above and beyond. It’s an amazing tribute to Drew Wall, Ms. Kittredge and all of our loved ones who have been affected by cancer,” Sydney Henderson, sr., said.

Barton and Lyman decided to help fix the gardens along the front entrance of Kennedy. They decided to place bricks around the gardens to honor and memorialize anyone our students and staff know who has suffered from cancer. They have planted the flowers in the shape of cancer awareness ribbons.

On these bricks, members of the Kennedy community could write one name of someone they know who has suffered from cancer. To write a name on a brick the cost is $1 per name.

“We watched the kids write names of people that they know on the bricks,” Barton said, “It was very powerful.”

Henderson wrote her father’s name on a brick.

“I bought the brick in honor of my dad who was a Kennedy alumni and died of cancer in 2008. I was really excited when I heard about this project and immediately knew I’d do one in honor of my dad. He loved Kennedy so much and would be really happy to be a part of it today,” Henderson said.

All of the proceeds from this project will go to cancer research.

“I wanted to donate to Josh and Grant’s project because it’s for a great cause. Cancer is a really big issue and any money that goes toward research will help,” Henderson said.